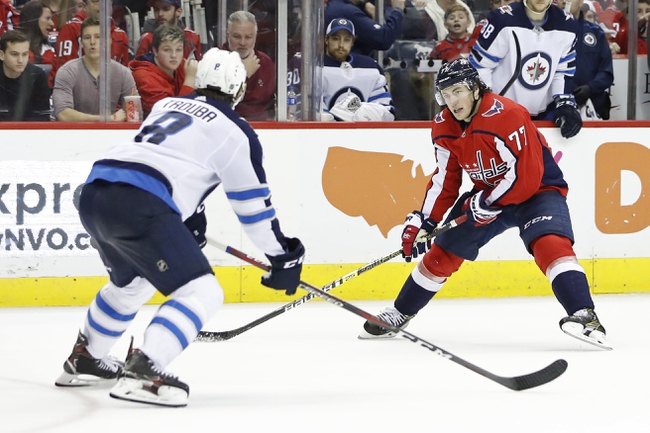 The Winnipeg Jets and the Washington Capitals meet in NHL action from the Capital One Arena on Tuesday night.

The Winnipeg Jets will look to rebound from back-to-back losses after a 2-1 loss to the Buffalo Sabres in their last outing. Buffalo opened the scoring just before the midway point of the first period before Blake Wheeler tied the game at one with just over three minutes to go in the 2nd period. The tie held up through the 2nd and a good chunk of the 3rd before Buffalo re-took the lead just under eight minutes into the 3rd period. Winnipeg outshot Buffalo 9-8 in the 3rd, but the Jets couldn’t find the game-tying goal as Buffalo held on for the win. Connor Hellebuyck took the loss, falling to 26-20-5 on the year after giving up both goals on 25 shots faced in the losing effort.

The Washington Capitals will look to build on a 5-3 win over the Pittsburgh Penguins in their last outing. Jakub Vrana opened the coring for the Caps just over six minutes into the game, and the lead would hold for the rest of the first and a good part of the 2nd before Pittsburgh took a 2-1 lead with a pair of goals :26 apart later in the 2nd period. Tom Wilson tied the game at two for Washington just over a minute into the period before Carl Hagelin gave Washington the lead just 3:25 later. The Penguins would tie the game at three just over four minutes later. T.J. Oshie would give Washington the lead for gooa just 1:50 after that before Hagelin iced the victory with an empty-netter in the final minute of play. Braden Holtby got the win to improve to 22-13-5 on the year after stopping 32 of 35 shots faced in the winning effort.

I considered Winnipeg and the plus money given how poorly the Caps have been against the puck line at home this season, but the fact is that the Jets have fallen flat in their last couple of road games, games against teams that aren’t on the same level as what Washington brings to the table here. The Capitals looked strong against Pittsburgh and I think we see more of the same in this one, so I’ll side with Washington and to get the price down, I’ll take the Capitals on the puck line.