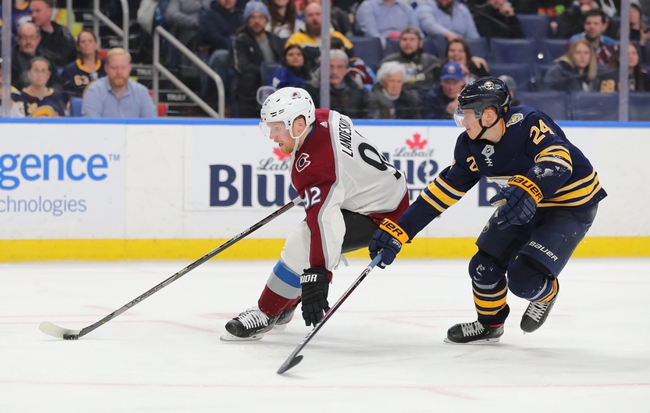 The Buffalo Sabres and the Colorado Avalanche meet in NHL action from the Pepsi Center on Wednesday night.

The Buffalo Sabres will look to build on back-to-back wins after a 2-1 win over the Winnipeg Jets last time out. Kyle Okposo opened the scoring for the Sabres just before the midway point of the opening period before Winnipeg tied the game at one later in the frame. The tie would hold up going into the 3rd where Okposo restored Buffalo’s lead for good with his 2nd goal of the game just before the eight-minute mark of the final frame. Winnipeg outshot Buffalo 9-8 in the final period, but the Sabres would hold on for the win and a key two points in their long road back to the playoff picture. Jonas Johansson got the win to improve to 1-1-1 on the year after stopping 25 of 26 shots faced in the winning effort.

The Colorado Avalanche will try to build on their current three-game winning streak after a 2-1 shootout win over Los Angeles in their last outing. The Kings took the lead less than five minutes into the game with a penalty shot before Ryan Graves tied the game at one with just over three minutes to go in the 2nd period. The rest of the 3rd period didn’t produce a go-ahead goal, and neither did overtime, so it was off to the shootout where Joonas Donskoi was the lone goal scorer in 6 attempts in the shootout, giving the Avs the win and the extra point that goes along with it. Pavel Francouz got the win to improve to 16-5-3 on the year after stopping 20 of 21 shots faced in the winning effort as well as all three shots faced in the shootout.

This is a lot of plus money to leave on the table I’ll admit, but the issue is that I’m not going anywhere near Buffalo on the road with a ten foot pole. The Sabres have been playing well, but the bulk of the success has come at home as usual, and the Avalanche have not been a team to mess with on home ice, especially when the Sabres roll into town. I think this is another game where the Sabres fail to translate their play away from home, so I’ll side with the Avalanche on the puck line to get the price down.