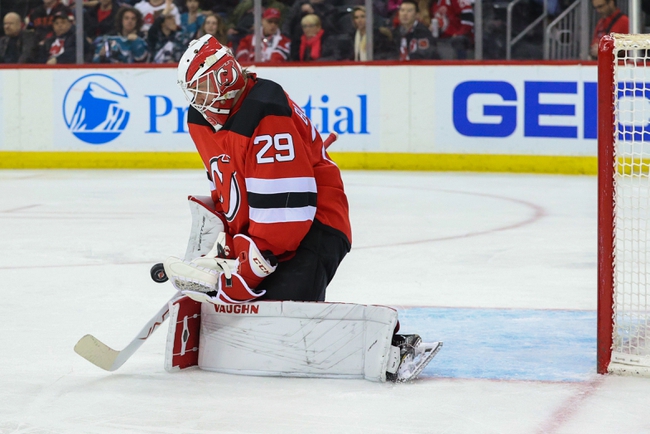 The New Jersey Devils and the San Jose Sharks meet in NHL action from the SAP Center on Thursday night.

The New Jersey Devils will look to add to their current three-game winning streak after a 4-1 win over Detroit last time out. Joey Anderson opened the scoring just over a minute into the game for the Devils before Jesper Bratt and Kyle Palmieri pushed the Devils’ lead to 3-0 with a pair of goals 2:47 apart in the 2nd period. Detroit got on the board just before the midway point of the 3rd period, but Nikita Gusev would cancel the marker out with a goal to make it 4-1 just four minutes later. The Devils would ride out the rest of the 3rd to get Cory Schneider his first win of the year, improving to 1-6-1 after stopping 27 of 28 shots faced in the winning effort.

The San Jose Sharks will be out to snap a five-game losing streak after a 4-2 loss to Philadelphia last time out. Philadelphia took the lead just over a minute and a half into the game before Joel Kellman tied the game at one less than five minutes later. Philadelphia surged ahead 3-1 just before the midway point of the 2nd period and the Flyers went up 4-1 early in the 3rd before Noah Gregor cut into the lead, making it 4-2 just over eight minutes into the 3rd. However, San Jose was outshot 9-3 in the 3rd period and the Sharks wouldn’t get any closer the rest of the way, getting sent back with yet another defeat. Aaron Dell took the loss, falling to 12-14-2 on the year after allowing all 4 goals on 27 shots faced in the losing effort.

I want to say I understand San Jose being favored because they’re at home, but truth be told, even that reasoning doesn’t make sense to me. The Sharks have lost 5 straight, and when you have guys like Joe Thornton who are veterans on the team who say they wanted out to have one last shot at a cup run, that doesn’t mean good things in the locker room. I’m still not a huge Devils fan, but there’s no denying that New Jersey is playing some really good hockey right now, and you could almost say they’re playing the kind of hockey that would match the lofty expectations put in front of them at the beginning of the season, but it just came too late in the year. Either way, I’m not laying juice with the Sharks in this form, so it’s the Devils with the plus money or a pass for me here.