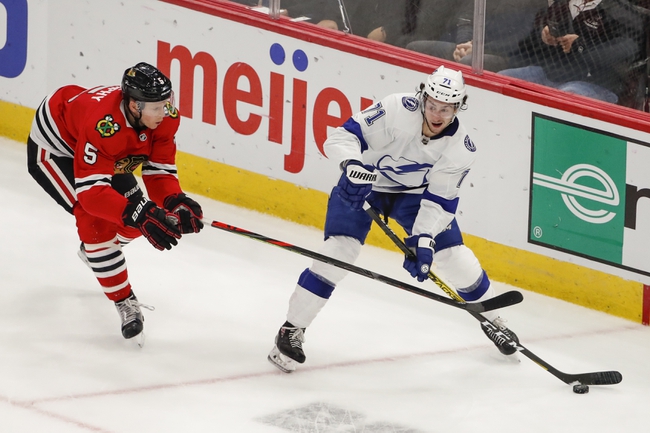 The Chicago Blackhawks and the Tampa Bay Lightning meet in NHL action from the Amalie Arena on Thursday night.

The Chicago Blackhawks will look to rebound from back-to-back losses after a 6-5 loss to the St. Louis Blues last time out. St. Louis took the lead within the opening minute of the game before Duncan Keith and Connor Murphy tied the game and took the lead for Chicago with a pair of goals 3:14 apart. Patrick Kane pushed Chicago 3-1 ahead just after the opening minute of the 2nd period but St. Louis would respond just before the eight minute mark, giving us a 3-2 game headed to the 3rd. St. Louis would surge ahead 4-3 with a pair of goals :16 apart early in the 3rd before Matthew Highmore tied the game at four just 1:13 later and Brandon Saad made it 5-4 Chicago just three minutes after that. St. Louis would tie the game at five just 1:12 later and the Blues would take the lead for good with 6:25 to go in the game as Chicago couldn’t respond the rest of the way, giving St. Louis the win in one heck of a game. Corey Crawford took the loss, falling to 11-18-3 on the year after giving up all 6 goals on 37 shots faced in the losing effort.

The Tampa Bay Lightning will be out to bounce back after a 4-3 loss to Toronto last time out, taking their 3rd straight loss in the process. Nikita Kucherov opened the scoring just before the midway point of the 1st period but the Leafs would tie the game just over three minutes later and would take a 2-1 lead just under four minutes after that. Patrick Maroon would tie the game at two with just over eight minutes to go in the 2nd, but Toronto would again respond just :31 later and would go up 4-2 1:56 after that. Yanni Gourde made things interesting at 4-3 early on in the 3rd, but despite the Lightning outshooting Toronto 14-3 in the 3rd, the Bolts wouldn’t find the game-tying goal as Toronto held on for a pretty big win. Andrei Vasilevskiy got the loss, falling to 32-12-3 on the year after allowing all 4 goals on 23 shots faced in the losing effort.

We’re back to seeing these heavy lines with the Lightning, and you could make a case that it’s not justified and the line is only this thick because it’s only a matter of time before Tampa Bay wins. However, I think that’s the case here as I just haven’t liked what I’ve seen from Chicago lately, and their questionable decision making at the trade deadline has me convinced that Chicago doesn’t see themselves in the postseason this year, regardless of what their performance against St. Louis might suggest. Tampa Bay needs a bounce back performance and I think it comes here as I don’t think Chicago’s goaltending can withstand the barrage that’s coming here. I’ll take Tampa Bay on the puck line to break out of their slump.