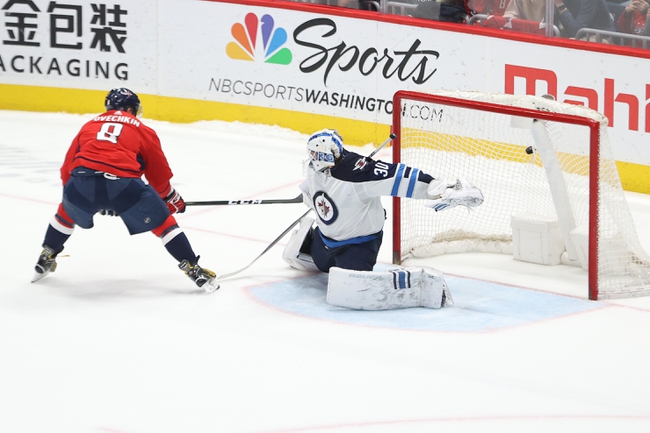 The Washington Capitals and the Winnipeg Jets meet in the second half of a home-and-home set in NHL action from Bell MTS Place on Thursday night.

The Washington Capitals come into this one looking to build on back-to-back wins while Winnipeg will be looking to snap a three-game losing skid after Washington took the first leg of this matchup by a final score of 4-3 in a shootout in Washington last time out.

Alex Ovechkin opened the scoring for the Caps just under two minutes into the game before Jakub Vrana doubled Washington’s lead just after the midway point of the opening period. Garnet Hathaway pushed Washington’s lead to 3-0 with just under seven minutes to go in the 2nd, but Nikolaj Ehlers would get Winnipeg on the board with just under two minutes to go in the 2nd period. Kyle Connor would cut the deficit to 3-2 just before the nine-minute mark of the 3rd and Mark Scheifele tied the game at three with just over three minutes to go, eventually forcing overtime. The extra period solved nothing, so it was off to the shootout where each side had one goal through the first three shooters and both sides had a goal in round 4 sudden death. In round 5, Ehlers missed for Winnipeg while Alex Ovechkin buried for Washington, giving the Caps the win and the extra point that goes along with it.

Braden Holtby ended up with the win for Washington, improving his record to 23-13-5 on the year after stopping 30 of 33 shots faced in the winning effort while Laurent Brossoit took the loss for the Jets, falling to 6-7-1 on the year after giving up his 3 goals on 37 shots.

The plus money with a home dog is usually worth a look, but Winnipeg is slumping right now, losing 3 straight coming into this one, and that’s not what you want playing against a Washington team that’s still the best in the league on the road and leads the NHL in money won on the road this season. I just think that Washington is in the driver’s seat to pick up another win and to sweep the home-and-home, so I’ll lay the juice with the Capitals on the road here.