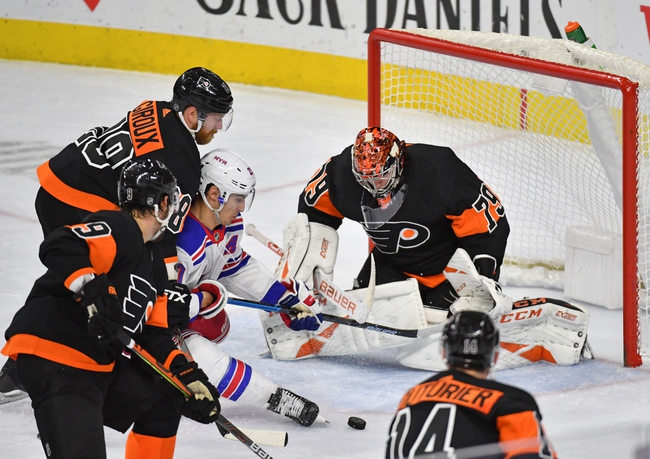 The New York Rangers and the Philadelphia Flyers meet in NHL action from the Wells Fargo Center on Friday night.

The New York Rangers will try to add to their current five-game winning streak after earning a 5-2 win over Montreal last time out. Montreal opened the scoring just over three minutes into the game and the lead would hold until late in the 2nd where Montreal doubled the lead with just under three minutes to go in the 2nd period. Phillip Di Giuseppe got the Rangers on the board just 1:33 later, and just after the midway point of the 3rd, the comeback was on. Mika Zibanejad tied the game and Adam Fox gave New York a 3-2 lead in a span of 1:15 before Ryan Strome made it 4-2 just 3:02 later and Strome would add a 2nd goal on an empty net with under two minutes to go to ice the win for New York. Alexandar Georgiev got the win to improve to 16-12-1 on the year after stopping 32 of 34 shots faced in the winning effort.

The Philadelphia Flyers will try to extend their current four-game winning streak after a 4-2 win over San Jose last time out. Nicolas Aube-Kubel opened the scoring just 1:32 into the game before San Jose tied the game at one less than five minutes later. Kevin Hayed restored Philly’s lead just before the four-minute mark of the 2nd period and Travis Konecny pushed the lead to 3-1 just before the midway point of the 2nd period. Hayes added his 2nd goal of the game just before the four-minute mark of the 3rd period before San Jose cut the deficit to 4-2 less than five minutes later. That was as close as San Jose would get as the Flyers slammed the door shut on any comeback attempt. Carter Hart got the win to improve to 20-12-3 on the year after stopping 26 of 28 shots faced in the winning effort.

I completely agree with the Flyers being favored at home, as Philly’s been lights out at home for the most part all season long, and catch not only the Rangers as a team on a back-to-back, but Georgiev is probably going to start here as well in goal, and that’s a situation he probably hasn’t faced many times in his career as a goaltender. However, if the line was a bit thinner, I’d be inclined to side with the Flyers, but strictly based on value, we’re getting 1.5 times our money with a Rangers team that just keeps on winning games regardless of the situation and could be a team to watch down the stretch and make the playoff picture interesting in the coming weeks. I’ll take a shot with the Rangers and the plus money here.