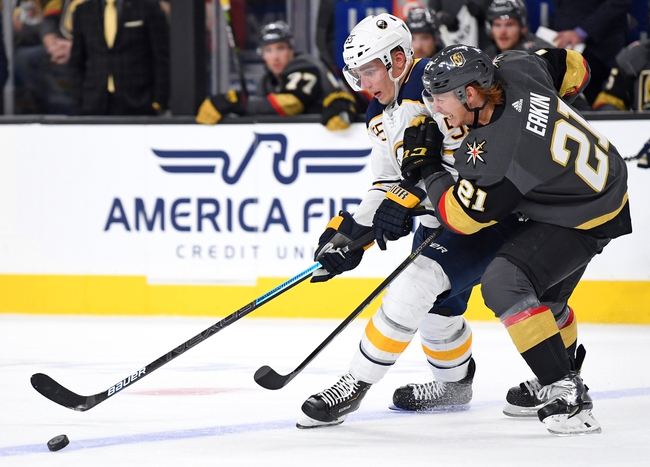 The Buffalo Sabres and the Vegas Golden Knights meet in NHL action from the T-Mobile Arena on Friday night.

The Buffalo Sabres will look to rebound from a 3-2 loss to the Colorado Avalanche last time out. Colorado opened the scoring with just under six minutes to go in the opening period but Zemgus Girgensons tied the game up at one for Buffalo less than two minutes later. The Avs re-took the lead just over seven minutes into the 2nd period but Curtis Lazar would tie the game at two with just over five minutes to go in the 2nd period. Colorado would re-take the lead with just over eight minutes to go in the game, and this time, Buffalo wouldn’t have a response as the Avalanche would ride the goal to the finish line, taking another road loss and heading out empty-handed. Carter Hutton took the loss, falling to 12-11-4 on the year after giving up 3 goals on 34 shots faced in the losing effort.

The Vegas Golden Knights will look to add to their current seven-game winning streak after a 3-0 win over Edmonton last time out. Max Pacioretty opened the scoring for the Golden Knights with just under four minutes to go in the opening period, and the lead would hold through the rest of the 1st and all of the 2nd before Nick Cousins doubled the lead just under six minutes into the final period and Shea Theodore pushed the lead to 3-0 just before the halfway point of the 3rd period. Edmonton would outshoot the Golden Knights 12-8 in the 3rd period, but Edmonton wouldn’t be able to breach Vegas’ goal as the Golden Knights held on for the shutout victory. Marc-Andre Fleury got the win to improve to 26-14-5 on the year after stopping all 29 shots faced for his 5th shutout of the season.

The heavy plus money is tempting at first, but then you remember to get a shot at it, you have to side with Buffalo on the road, and as history has shown, that play is not something I’m willing to partake in. The Sabres are just bad on the road and have been for years, and now have to go on the road to take on a red-hot Vegas team that has historically played well on home ice since its inception into the league just a couple of years ago. I think this is another game that Vegas controls from start to finish, so I’ll side with the Golden Knights on the puck line to get the price down.