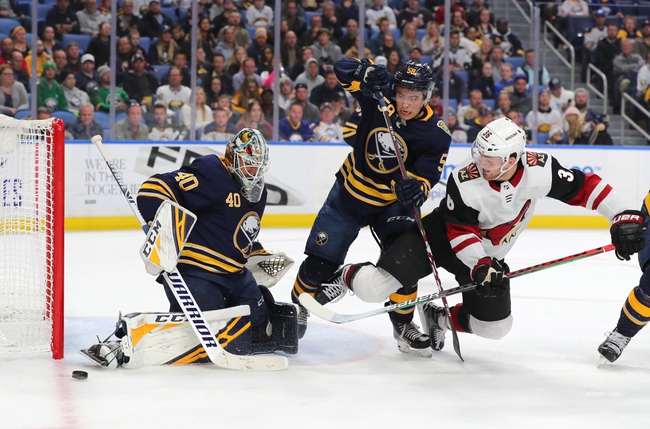 The Buffalo Sabres and the Arizona Coyotes meet in NHL action from the Gila River Arena on Saturday night.

The Buffalo Sabres will look to rebound from back-to-back losses after a 4-2 loss to Vegas last time out. Dominik Kahun opened the scoring just over two minutes into the game before Vegas tied the game at one just after the midway point of the opening period. The tie held up for the rest of the first and all of the 2nd before Vegas surged ahead 3-1 with a pair of goals 2:19 apart early on in the 3rd period. The Golden Knights added a 4th on an empty-net with just under two minutes to go. Jeff Skinner would pull a consolation goal back for Buffalo but it was too little too late as the Golden Knights held on for the win. Carter Hutton took the loss, falling to 12-12-4 on the year after stopping 24 of 27 shots faced in the losing effort.

The Arizona Coyotes will look to rebound from a 2-1 loss to Florida in their last outing. Brad Richardson opened the scoring for Arizona with the lone goal of the 1st period but the Panthers would tie the game in the 2nd and take the lead less than nine minutes into the 3rd period. Arizona outshout the Panthers in all three period, including 14-11 in the 3rd, but the Coyotes wouldn’t get any closer as Florida held on for the win. Darcy Kuemper took the loss, falling to 15-9-2 on the year after stopping 24 of 26 shots faced in the losing effort.

I considered the Sabres strictly as a value play as I’m not sure the Coyotes should be priced this heavily. However, the Sabres have been terrible on the road for some time and also haven’t been historically good on the second-half of a back-to-back either. The Coyotes are struggling, but the defensive effort is still there, it’s just the offense that has to start holding up their end of things. I’m going to side with Arizona in regulation as I just see this being a 2-1 or 3-2 type of game. The under may be worth a look as well.