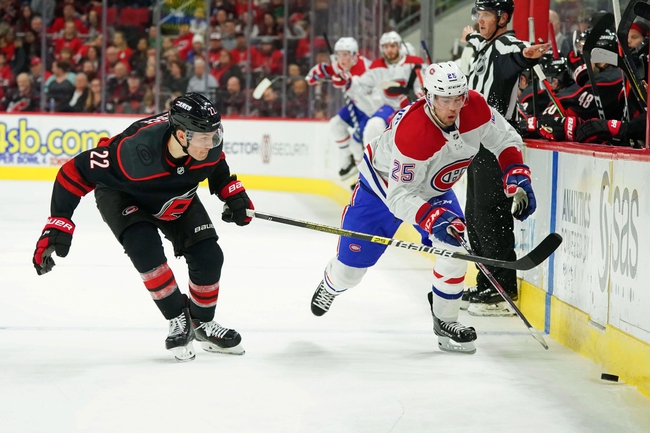 The Carolina Hurricanes and the Montreal Canadiens meet in NHL action from the Bell Centre on Saturday night.

The Carolina Hurricanes will try to rebound from back-to-back losses after a 3-2 loss to Colorado last time out. Colorado opened the scoring just under seven minutes into the game before doubling their lead later in the 2nd period. Teuvo Teravainen struck twice in a span of 2:01 to tie the game for Carolina early on in the 3rd, but the Avs would respond and take the lead for good with less than three minutes to go in the game. Anton Forsberg took the loss after allowing 3 goals on 32 shots faced in the losing effort.

The Montreal Canadiens will be out to rebound from back-to-back losses after a 5-2 loss to the New York Rangers last time out. Max Domi opened the scoring for Montreal just over three minutes into the game and the lead held through the rest of the 1st and most of the 2nd before Tomas Tatar doubled the lead with just under three minutes to go in the 2nd period. New York responded just 1:33 later, and the Rangers would jump in front 4-3 with a pair of goals 1:13 apart. New York added a 4th goal with just under five minutes to play and iced the win with a 5th goal coming on an empty-net late. Carey Price took the loss, falling to 26-23-6 on the year after allowing 4 goals on 34 shots faced in the losing effort.

I’ve been all over the Canadiens lately, as just when you think Montreal is ready to turn the corner and make a serious playoff push over the last couple of months, the Habs go on this unexplainable losing stretch and just tailspin out of the race. However, Carolina is playing with their 3rd and 4th choice goaltenders right now with Reimer and Mrazek dealing with injuries, and the ‘Canes are on a back-to-back. We’ve seen Carolina pull it off with a Zamboni driver, but if the Habs can’t get a win in this favorable spot, the Canadiens will be in a world of trouble. I’ll lay the juice with the Canadiens at home here.