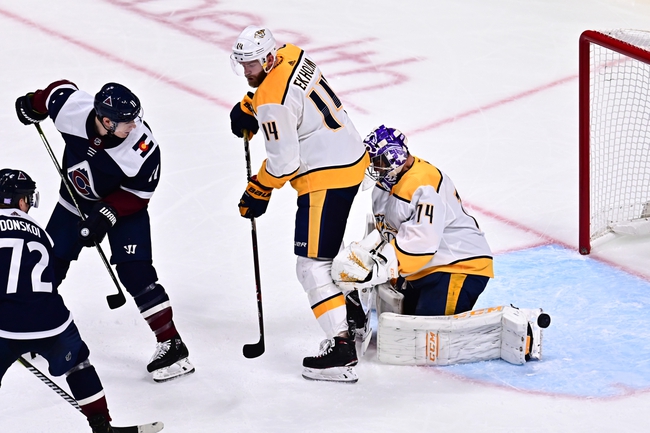 The Colorado Avalanche and the Nashville Predators meet in NHL action from the Bridgestone Arena on Saturday night.

The Colorado Avalanche will look to add to their current five-game winning streak after a 3-2 win over Carolina last time out. Tyson Jost opened the scoring just under seven minutes into the game before doubling his tally and Colorado’s goal count with his 2nd goal of the game with just over seven minutes to go in the 2nd period. Carolina would tie the game at two early on in the 3rd with a pair of goals 2:01 apart, but Samuel Girard came to Colorado’s rescue, scoring the game-winning goal with just under three minutes to play to give the Avs the win. Pavel Francouz got the win to improve to 18-5-3 on the year after stopping 45 of 47 shots faced in the winning effort.

The Nashville Predators will look to add to their current three-game winning streak after a 4-3 win over Calgary last time out. Colton Sissons gave Nashville the lead with just over :30 to go in the opening period but Calgary would tie things up at one just :26 into the period and the Flams took a 2-1 lead less than four minutes into the 2nd period. The Predators tied the game with just over five minutes to go in regulation, but Calgary re-took the lead in the final minute of play and looked headed for a win. However, Mikael Granlund tied the game at three with just :01 to go, forcing the game into OT where Granlund doubled his tally for the game-winner just 1:20 into OT. Juuse Saros got the win to improve to 14-10-4 on the year after stopping 36 of 39 shots faced in the winning effort.

The Avs haven’t had a lot of luck against the Predators, both overall and in Smashville, but the Avalanche just keep on winning games and producing winners for us. Nashville’s been doing the same lately, but we’re getting plus money with a Colorado team that’s won 5 straight. This should be a great game, but strictly from a value perspective, I’ll take my chances with Colorado here.