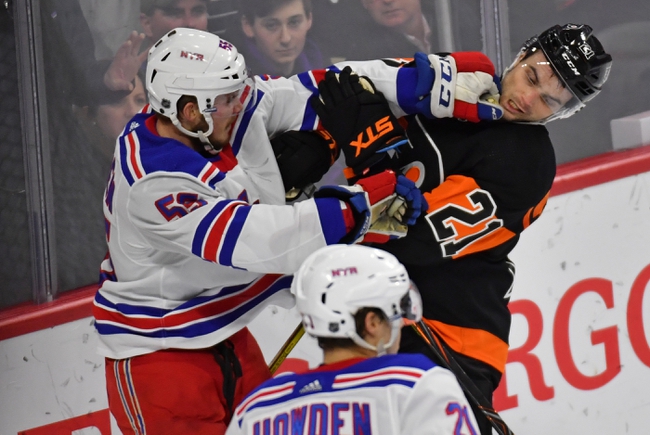 The Philadelphia Flyers and the New York Rangers meet in the second half of a home-and-home clash in the Metropolitan division in NHL action from Madison Square Garden on Sunday afternoon.

Jesper Fast opened the scoring just under three minutes into the game for the Rangers, but Sean Couturier would tie the game at one with just under four minutes to go in the opening period.

James van Riemsdyk and Claude Giroux pushed the Flyers’ lead to 3-1 with a pair of 2nd period goals 2:05 apart before Giroux extended the lead to 4-1 early in the 3rd with his 2nd goal of the game. Kevin Hayes made it 5-1 Philly with just over seven minutes to go and Brett Howden would add a consolation goal for New York with just :26 to play, but it was too little too late as the Flyers held on for the win.

Carter Hart got the win to improve to 21-12-3 on the year for the Flyers after stopping 26 of 28 shots faced in the winning effort while Alexandar Georgiev was on the losing end for the Rangers, falling to 16-13-1 in goal after giving up all 5 goals on 40 shots in defeat.

I get that the Flyers got the upper hand in the first leg and have had the advantage against the Rangers in recent meetings, winning 8 of the last 9. However, Philadelphia is also a different team on the road than at home, and that has been a theme in this matchup as well as the Flyers have dropped 16 of their last 22 trips to MSG. The Rangers, despite a loss in their last outing to the Flyers, are still playing really good hockey right now, and I think New York gets some retribution and takes advantage of the dropoff in play for the Flyers on the road. I’ll lay the juice with New York here.