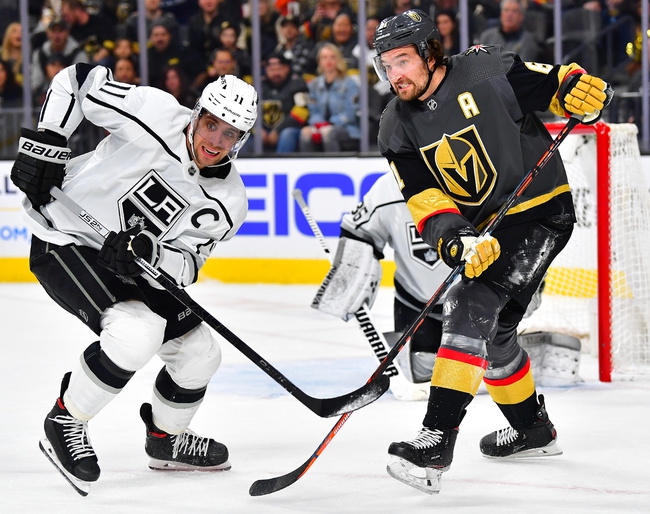 The Los Angeles Kings and the Vegas Golden Knights meet in a Pacific division tilt in NHL action from T-Mobile Arena on Sunday night.

The Los Angeles Kings will look to build on back-to-back wins after a 2-1 overtime win over New Jersey last time out. New Jersey took the lead in the opening 7:19 of the 1st before Dustin Brown tied the game up at one goal apiece with just under seven minutes to go in the 2nd period. The 3rd period was unable to produce a winner, so the game headed to overtime where Adrian Kempe buried the game-winner just under two minutes into overtime, sending the Kings home with the win and the extra point. Jonathan Quick got the win to improve to 14-22-4 on the year after stopping 32 of 33 shots faced in the winning effort.

The Vegas Golden Knights will try to add to their current eight-game winning streak after a 4-2 win over Buffalo last time out. Buffalo opened the scoring just over two minutes into the game before Nicolas Roy tied the game at one with just under nine minutes to go in the opening frame. The tie held going into the 3rd, where William Karlsson and Reilly Smith scored 2:19 apart to break the game open at 3-1 and Smith added his 2nd goal of the game on an empty-net to make it 4-1 with just under two minutes to play. Buffalo added a consolation goal, but it was too little too late as Vegas held on for the win. Robin Lehner got the win to improve his season mark to 17-10-5 on the year after allowing just two goals on 34 shots faced in the winning effort.

The plus money with the Kings is tempting after L.A. looked alright in back-to-back wins, but the problem is that both of those wins came at home and on a back-to-back and on the road is not a good spot for the Kings as L.A.’s just been brutal away from home this season. Vegas is rolling right now and the prices are proof of that, but sometimes you just have to find ways around the heavy price tag and I’ll do that by siding with Vegas on the puck line as I don’t think the Kings know how to keep pace on the road in this one.