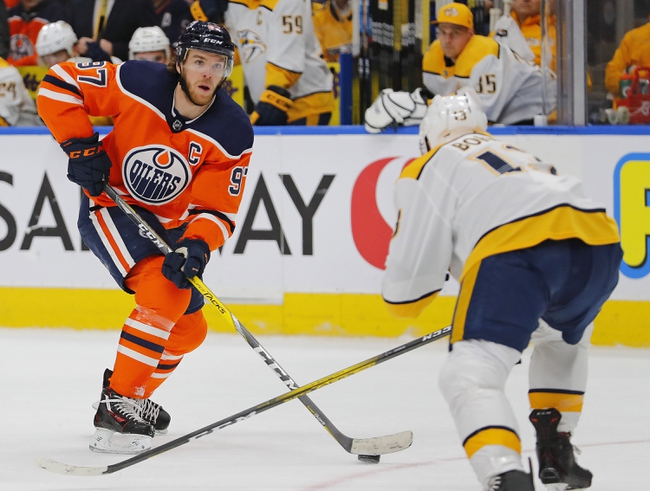 The Edmonton Oilers and the Nashville Predators meet in NHL action from Bridgestone Arena on Monday night.

The Edmonton Oilers will look to build on a 3-2 win over Winnipeg last time out. Leon Draisaitl opened the scoring just over six minutes into the game before Winnipeg tied the game and took the lead in a span of :34. Draisaitl tied things up at two with his 2nd goal of the game in the last minute of the 2nd period before Ryan Nugent-Hopkins broke the tie with just over five minutes to go in the game, giving Edmonton the lead for good in the process. Mike Smith ended up picking up the win, improving to 18-10-6 on the year after stopping 39 of 41 shots faced in the winning effort.

The Nashville Predators will look to rebound from a 3-2 loss to the Colorado Avalanche last time out. The game was scoreless through the opening 20 minutes and the first half of the 2nd period before Colorado surged out to a 2-0 lead with a pair of goals 2:15 apart. The 2-0 score would hold through a lot of the 3rd before Viktor Arvidsson got the Predators on the board with just over five minutes to go in the 2rd. Colorado would restore the two-goal cushion with just under a minute to go, but Calle Jarnkrok would make it 3-2. The problem is that there were only two seconds left and not enough time for Nashville to tie the game, giving the Avs the win. Juuse Saros got the loss to improve to 14-11-4 on the year after allowing a pair of goals on 30 shots faced in the losing effort.

I considered the Oilers and the plus money, and the win over the Jets was a nice one for Edmonton. However, the Oilers also haven’t had much luck against the Predators in recent years, and Nashville is trying to fight teams off that are chasing them for that 2nd wild card spot. I just think that this is a game where the Predators step up and take care of business, so I’ll lay the juice with Nashville at home here.