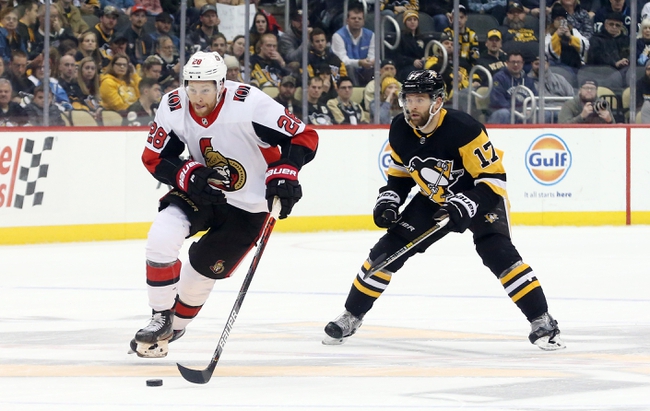 The Ottawa Senators and the Pittsburgh Penguins meet in NHL action from PPG Paints Arena on Tuesday night.

The Ottawa Senators will look to build on back-to-back wins after a 4-3 shootout win over Detroit last time out. Detroit opened the scoring just under four minutes into the 1st, and carried that lead into the 2nd period where the Red Wings would double the lead just under seven minutes into the middle frame. Artem Anisimov got the Sens on the board with just over six minutes to go in the middle frame before Scott Sabourin tied the game less than two minutes into the 3rd. Anisimov gave Ottawa the lead just past the six-minute mark of the 3rd but the lead would last all of 1:37 before Detroit tied the game at three. The rest of the 3rd didn’t produce a winner and neither did OT, so it was off to the shootout where the aforementioned Anisimov found the net again, the only shooter of the six required to find the back of the net on either side, giving Ottawa the win and the extra point. Marcus Hogberg got the win to improve to 5-7-8 on the year after stopping 25 of 28 shots faced in the winning effort as well as all 3 attempts faced in the shootout.

The Pittsburgh Penguins will be out to snap a six-game losing skid after a 5-0 loss to San Jose last time out. San Jose took a 1-0 lead with just over a minute to go in the 1st period before the Sharks pushed ahead 3-0 in the 2nd with a pair of goals 3:03 apart. San Jose would add a 4th goal just after the six-minute mark of the frame and chipped in a 5th with just under four minutes to go in the final period. Tristan Jarry got the loss, falling to 20-11-1 after allowing all 5 goals on 32 shots faced in the losing effort.

I’m trying to decide between the lesser of two evils here, as you have Ottawa who’s been bad for most of the year, especially on the road, against a Pittsburgh team that’s lost 6 straight and is probably due. However, I thought Pittsburgh’s been due for a couple of games now, and backing the Pens has blown up in my face in winnable situations. Ottawa has no expectations left to live up to and like it or not, they’re playing better hockey than the Penguins are right now. I wouldn’t be surprised with a bounce back win for Pittsburgh here, but I think if it happens it’s a close game, so I’ll take Ottawa on the puck line, starting out with a goal as the price isn’t bad for a team to start out with a goal in hand.