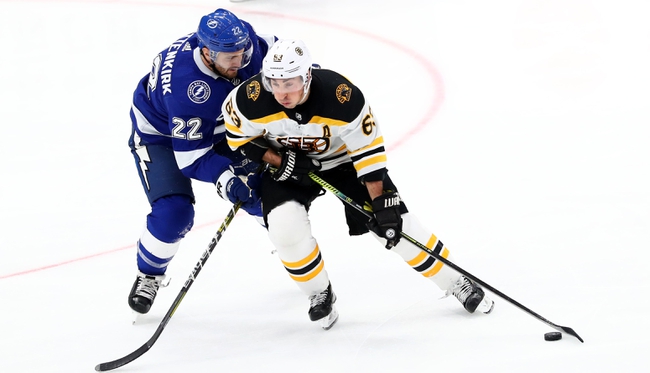 The Boston Bruins and the Tampa Bay Lightning meet in an Atlantic division matchup in NHL action from the Amalie Arena on Tuesday night.

The Boston Bruins will try to build on back-to-back wins after a 4-0 win over the New York Islanders last time out. David Pastrnak opened the scoring for the B’s just 4:30 into the game before Marek Grzelcyk doubled the lead with just under seven minutes to go in the opening frame. The 2-0 advantage would hold thorugh the 2nd and into the 3rd where Brad Marchand made it 3-0 short-handed with just under nine minutes to go and Charlie McAvoy added a 4th goal with less than 4 minutes to go, taking an insurmountable 4-0 lead for the Bruins in the end. Tuukka Rask picked up the win for Boston, improving to 24-7-6 after stopping all 25 shots faced in the winning effort.

The Tampa Bay Lightning will be out to build on a 4-3 win over Calgary last time out. Tyler Johnson opened the scoring for the Bolts with just over six minutes to go in the opening frame before Ondrej Palat doubled the lead just aver the seven-minute mark of the 2nd and Yanni Gourde pushed the lead to 3-0 with a short-handed marker with under eight minutes to play in the middle frame. Calgary got on the board just 1:22 later and cut the lead to 3-2 just :52 after that, but the Lightning would restore the two-goal lead just :53 later. The 4-2 score would hold up until Calgary made things interesting at 4-3 with just under three minutes to go, but ultimately it was too little too late as Tampa Bay held on for the win. Andrei Vasilevskiy got the win to improve to 33-12-3 on the year after stopping 18 of 21 shots faced in the winning effort.

I considered Tampa at home as you don’t get these kinds of prices with the Lightning. However, it’s even more rare to get Boston at plus money and even with the win over Calgary I haven’t liked much of what Tampa’s brought to the table in the last couple of weeks. Boston hasn’t had much luck against Tampa Bay, but the Bruins are the better team here and I can see Boston bucking the trends and getting a win here.