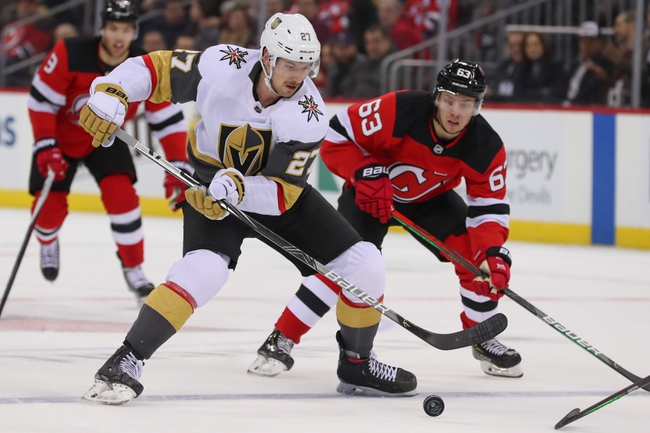 The New Jersey Devils and the Vegas Golden Knights meet in NHL action from the T-Mobile Arena on Tuesday night.

The New Jersey Devils will be looking to build on a 3-0 win over the Anaheim Ducks in their last outing. The Devils struck in each period, with Pavel Zacha opening the scoring with less than three minutes to go in the opening period before doubling his goal tally and the lead less than four minutes into the 2nd period. Nico Hischier pushed New Jersey’s lead to 3-0 with just over six minutes to go in the 3rd period, and that’s all the Devils would need as New Jersey rode their goaltending to the finish line. Cory Schneider got the win to improve to 2-6-2 on the year after stopping all 34 shots faced in the winning effort for his 1st shutout of the season.

The Vegas Golden Knights will look to rebound from a 4-1 loss to the Los Angeles Kings in their last outing. Los Angeles opened the scoring just over two minutes into the game before doubling the lead just before the eight-minute mark of the opening period. L.A. would ride that lead into the 2nd period where the Kings would take a 3-0 lead just after the midway point of the period but Shea Theodore would get Vegas on the board just 3:10 later. L.A. restored the three-goal lead just before the end of the 2nd period and despite Vegas outshooting L.A. 37-8 in the last two periods, including a whopping 19-1 in the 3rd period, the Golden Knights wouldn’t get any closer as the Kings held on for the win. Marc-Andre Fleury got the win to improve to 26-15-5 on the year after giving up 4 goals on 17 shots faced in the losing effort.

The plus money with Jersey is tempting given that the Devils have played some pretty decent hockey lately, but the fact remains that New Jersey isn’t a team I’m trying to back long-term, especially on the road where they’ve lost pretty much two out of every three games for the last couple of years now. Vegas has picked up their play in a major way over the last month or so, and the Golden Knights are finding their groove at just the right time. Bottom line is that  Vegas is hot right now and I think New Jersey’s just in the wrong place at the wrong time. Give me Vegas on the puck line to get the price down a bit.