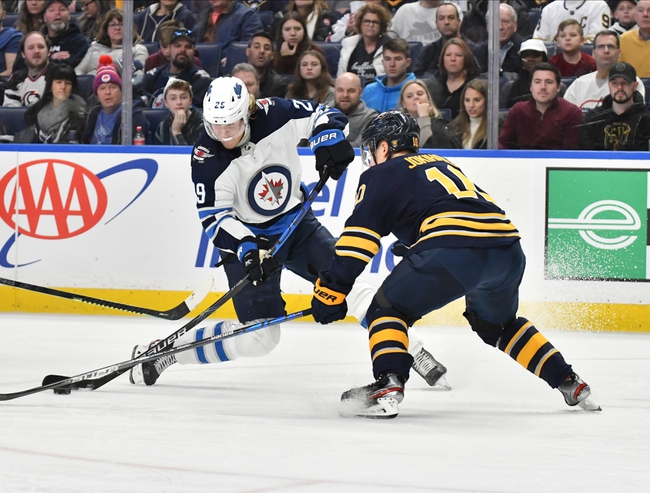 The Buffalo Sabres and the Winnipeg Jets meet in NHL action from the Bell MTS Place on Tuesday night.

The Buffalo Sabres will be out to snap a three-game losing streak after a 5-2 loss to Arizona last time out. Marcus Johansson opened the scoring just 7:59 into the game before Jeff Skinner doubled the lead just :44 later. That’s where Buffalo’s luck ran out, as Arizona tied the game early in the 2nd with a pair of goals :53 apart and took the lead just 4:17 after that. The Coyotes would ride the lead into the 3rd where the ‘Yotes made it 4-1 with just over six minutes to go in the game. The Coyotes would add a 5th goal on an empty net with just :20 to go. Jonas Johansson took the loss, falling to 1-2-1 on the year after allowing 4 goals on 30 shots faced in the losing effort.

The Winnipeg Jets will look to rebound from a 3-2 loss to Edmonton last time out. Edmonton opened the scoring with the lone goal of the first period before Winnipeg stormed ahead in the later stages of the 2nd period with goals :34 apart in the latter stages of the 2nd period. Edmonton would restore the lead in the last minute of the 2nd period and would make it 3-2 with just over five minutes to play. Despite Winnipeg outshooting the Oilers 19-7 in the 3rd and 33-14 over the final two periods, the Jets wouldn’t find the game tying goal. Connor Hellebuyck got the loss, falling to 27-21-5 after allowing 3 goals on 32 shots faced in the defeat.

Head-to-head, Buffalo is 5-13 in the last 18 meetings between these two teams in Winnipeg.

I considered Buffalo and the plus money, but the problem is that the Sabres have been pretty bad on the road for the last couple of years now, and quite frankly, blindly fading the Sabres on the road, you’ve probably made more than you’ve lost. Winnipeg hasn’t been as strong at home as we’re used to, but I think you have to side with the Jets at home even if it’s more of a fade from Buffalo on the road than anything else.