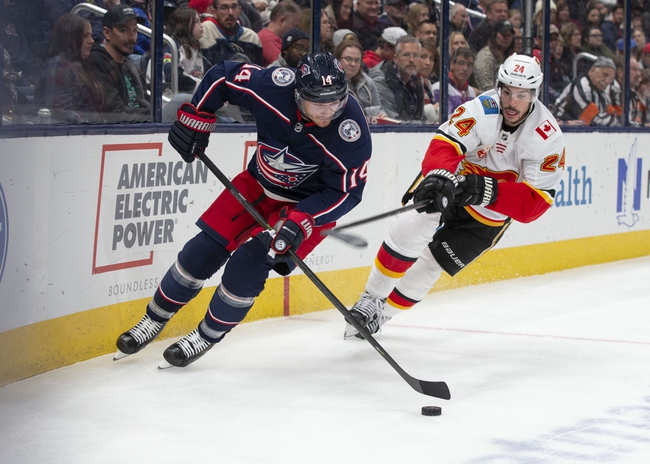 The Columbus Blue Jackets and the Calgary Flames meet in NHL action from the Scotiabank Saddledome on Wednesday night.

The Columbus Blue Jackets will look to build on a 5-3 win over Vancouver in their last outing. Vancouver opened the scoring just a minute into the game and doubled the lead just after the seven-minute mark of the opening period. Kevin Stenlund pulled a goal back just after the midway point of the opening period, sending us to the 2nd with a 2-1 scoreline. The Canucks added a 3rd goal in the 2nd period, but Riley Nash would respond later in the 3rd period before Zach Werenski tied the game at three just 2:27 later. Emil Bemstrom gave Columbus the lead with less than two minutes to go, and the Blue Jackets iced the win with a Gustav Nyquist empty-netter In the dying seconds of the 3rd. Joonas Korpisalo got the win to improve to 19-11-4 on the year after stopping 36 of 39 shots faced in the winning effort.

The Calgary Flames will look to build on a 3-0 win over Florida last time out. Johnny Gaudreau opened the scoring for Calgary with the lone goal of the opening period just 6:21 into the game before Milan Lucic doubled Calgary’s lead just after the three-minute mark of the 2nd period. T.J. Brodie made it 3-0 just over a minute into the 3rd period, and despite Florida outshooting the Flames 38-28 in the game, Calgary still held on for the shutout victory. Cam Talbot picked up the win in goal to improve to 10-10-1 on the year after stopping all 38 shots faced in the winning effort for his 2nd shutout of the year.

This game for me is about picking the lesser of two evils as you have Columbus who still have issues buying a win right now against a Calgary team that’s been playing better but suddenly can’t win on home ice if their proverbial lives depended on it. With that said, these two teams only play twice a year, so head-to-head stats sometimes don’t hold as much water in an argument. Columbus can’t buy a win on the road lately, and the Flames are just playing the better hockey and are due for a bounce back performance at home here. I’ll side with Calgary to get the job done in regulation.