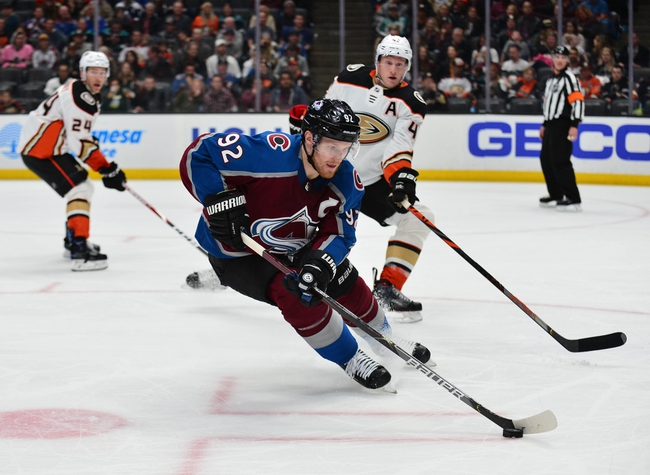 The Anaheim Ducks and the Colorado Avalanche meet in NHL action from the Pepsi Center on Wednesday night.

The Anaheim Ducks will look to rebound from back-to-back losses after a 6-2 loss to Chicago last time out. Chicago opened the scoring just over two minutes into the game before doubling their lead just before the four minute mark of the 2nd period. Danton Heinen pulled one back for Anaheim just :34 later, but the Blackhawks would restore the two goal cushion with just four and a half minutes to go in the 2nd and would surge ahead 5-1 with a pair of goals :15 apart. Carter Rowney pulled another goal back for the Ducks early in the 3rd, but all it ended up being was a consolation goal as Chicago added a 6th goal for good measure with just under five minutes to play. John Gibson took the loss, falling to 19-26-5 on the year after allowing 5 goals on 24 shots faced before being pulled in the 2nd period.

The Colorado Avalanche will look to add to their current seven-game winning streak after a 2-1 win over Detroit last time out. Detroit opened the scoring just under six minutes into the game before Vladislav Namestnikov tied the game at one with just over seven minutes to go in the opening frame. Logan O’Connor gave the Avalanche the lead with 5:29 to go in the 2nd and despite Detroit’s best efforts, the Red Wings couldn’t tie things up as Colorado left with the victory. Michael Hutchinson got the win to improve to 5-9-1 on the year after stopping 17 of 18 shots faced in the winning effort.

The Ducks have had success against Colorado in recent years, but let’s be honest, that was then and this is now. I don’t want any part of the Ducks, especially on a back-to-back against a Colorado team that’s rolling along, red-hot with seven straight wins and playing a Ducks team that used both of their goaltenders last night. This game has beatdown written all over it in my opinion, so I’ll side with the Avalanche on the puck line to get the price down.