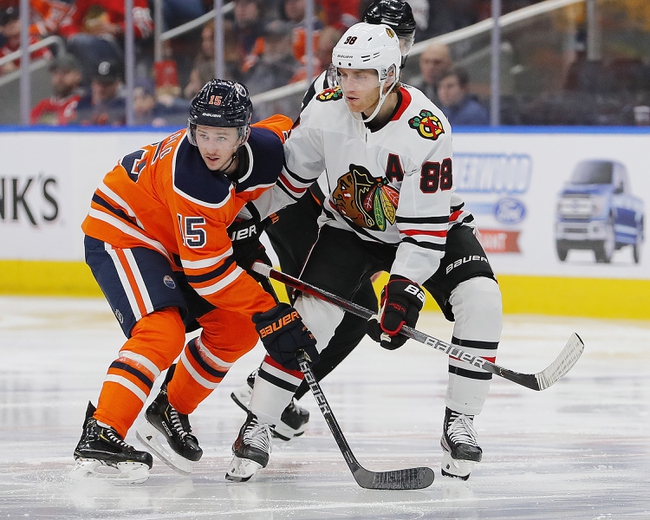 The Edmonton Oilers and the Chicago Blackhawks meet in NHL action from the United Center on Thursday night.

The Edmonton Oilers will look to build on their current three-game winning streak after a 2-1 overtime win over Dallas last time out. The game was scoreless through the opening 20 minutes before Ryan Nugent-Hopkins broke the deadlock just over seven minutes into the 2nd period. The lead would hold going into the 3rd, where Dallas would tie the game at one just under seven minutes into the 3rd period. The tie would hold through the remainder of regulation, so it was off to OT where Alex Chiasson buried the OT winner for the Oilers just over a minute into the extra period. Mikko Koskinen got the win to improve to 17-13-2 on the year after stopping 42 of 43 shots faced in the winning effort.

The Chicago Blackhawks will also look to extend their current three-game winning streak after a 6-2 win over Anaheim last time out. Drake Caggiula opened the scoring for Chicago just over two minutes into the game and the lead would hold until Dylan Strome doubled the lead just before the four-minute mark of the 2nd. Anaheim pulled a goal back just :34 later, but Strome would score his 2nd goal of the game with 4:31 to go in the 2nd and Alex Nylander and Patrick Kane would bury :15 apart to push Chicago ahead 5-1. Anaheim puled a goal back just after the eight-minute mark of the 3rd period. David Kampf would shut the door on any attempted Anaheim comeback with a 6th goal with just under five minutes to go and the Blackhawks would hold on the rest of the way to ice things in the 3rd. Corey Crawford got the win, improving to 14-18-3 on the year after stopping 37 of 39 shots faced in the winning effort.

I’ve gone back and forth on this one, as both teams come in playing really well, winning three straight. However, while Chicago has been alright at home this season, the Oilers have a talented lineup and are really the only team fighting for anything right now as they’re chasing Vegas for top spot in the Pacific. I still question Chicago’s moves at the trade deadline and I just don’t think this Chicago team is serious the rest of the way. I’ll take a shot with Edmonton and the even money here.