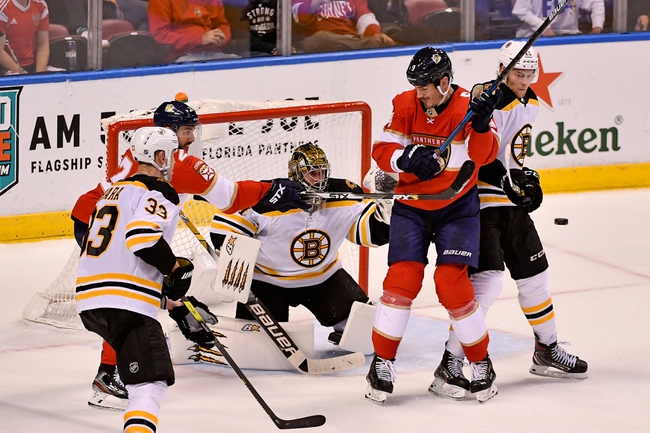 The Boston Bruins and the Florida Panthers meet in NHL action from the BB&T Center on Thursday night.

The Boston Bruins will try to add to their current three-game winning streak after 2-1 win over Tampa Bay last time out. Brad Marchand opened the scoring for the Bruins with just under a minute to go in the opening frame. Jake DeBrusk would double Boston’s lead just after the midway point of the 2nd period but Tampa Bay would pull a goal back with just 2:32 to go in the 2nd. Despite their best efforts. Tampa Bay wouldn’t get any closer as Boston held on for a huge win. Tuukka Rask got the win to improve to 25-7-6 on the year after stopping 20 of 21 shots faced in the winning effort.

The Florida Panthers will be out to snap a three-game losing streak after a 3-0 loss to Florida last time out. Calgary opened the scoring just over six minutes into the game before doubling their last just over three minutes into the 2nd and adding a 3rd goal just over a minute into the 3rd period. Florida outshot the Flames 38-28 in the game but still couldn’t break the seal on Calgary’s goal as the Flames came in and picked up the win, sending Florida home empty-handed. Sam Montembault took the loss, falling to 5-5-1 on the year after giving up all 3 goals on 28 shots faced in the losing effort.

I’ve gone back and forth on this game, as Florida getting plus money at home could be tempting. However, Boston is back to rolling along right now and are looking more and more (if they weren’t before) like the team that’s going to hoist the Presidents’ trophy and could be skating away with the Stanley Cup in just a couple of months. I just think that Boston and a reasonable price isn’t something I’m trying to shy away from, so I’ll lay the juice with Boston on the road here.