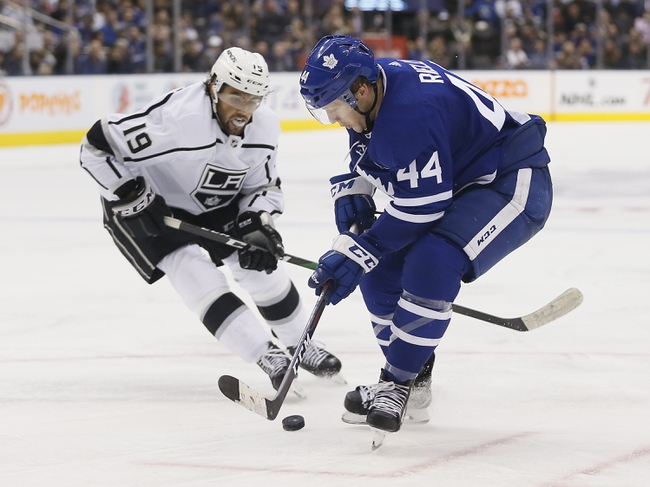 The Toronto Maple Leafs and the Los Angeles Kings meet in NHL action from the Staples Center on Thursday night.

The Toronto Maple Leafs will look to rebound after a 5-2 loss to the San Jose Sharks in their last outing. San Jose opened the scoring less than seven minutes into the game before Auston Matthews got the Leafs on the board less than three minutes into the 2nd period. The tie lasted all of 1;06 before the Sharks re-took the lead. Mitch Marner tied the game at two for Toronto with just 2:33 to go in the 2nd but San Jose would break things open in the 3rd with a pair of goals :50 apart to take a 4-2 leads and added a 5th for good measure in the last minute of the game. Jack Campbell took the L, falling to 11-11-3 on the year after giving up 4 goals on 37 shots faced in the losing effort.

The Los Angeles Kings will try to build on their current three-game winning streak after a 4-1 win over Vegas last time out. Anze Kopitar opened the scoring just over two minutes into the game before doubling their lead just before the eight minute mark of the 1st with his 2nd goal of the game. Trevor Lewis would make it 3-0 for L.A. just after the midway point of the 2nd period but Vegas would pull a goal back just 3:10 later, but the Kings would restore the three-goal cushion in the last minute of the middle period and neither side would bury anything else the rest of the way, despite the Golden Knights outshooting the Kings 37-8 in the final two periods including 19-1 in the 3rd. Calvin Petersen got the win to improve to 3-3-0 on the year after stopping 42 of 43 shots faced in the winning effort.

I get that the Kings have been knocking teams off lately, especially at home where the Kings tend to play their best hockey. Toronto didn’t get their road trip started the way they would’ve liked in losing to San Jose, but the Leafs are the better team side-by-side and are the only team going anywhere most likely come playoff time. I’ll lay the juice with Toronto to win in regulation on the road here to pick up another key win in the playoff race.