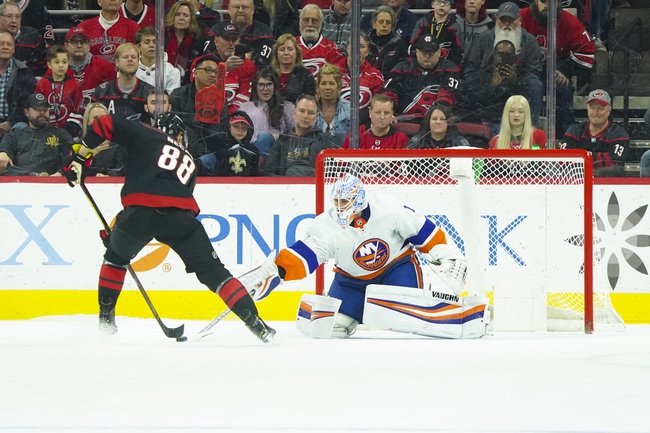 The Carolina Hurricanes and the New York Islanders meet in NHL action from the Nassau Coliseum on Saturday afternoon.

The Carolina Hurricanes will be out to snap a four-game losing skid after a 4-1 loss to Philadelphia last time out. Philadelphia got on the board late in the opening period and doubled the lead just before the midway point of the 2nd period before Justin Williams got Carolina on the board just before the three-minute mark of the 3rd period. Philadelphia would respond less than two minutes later with a pair of goals :26 apart to give the Flyers a 4-1 lead that they’d ride all the way to the finish line. Alex Nedeljkovic took the loss, falling to 0-2-1 on the year after giving up 4 goals on 32 shots faced in the losing effort.

The New York Islanders will be out to snap a five-game losing streak after a 4-3 loss to Ottawa last time out. Anders Lee opened the scoring just before the four-minute mark of the opening period before Ottawa tied the game at one with over six minutes to go in the 1st period. Mathew Barzal helped the Islanders re-take the lead just over four minutes into the 2nd period before Ottawa tied the game short-handed at the midway point of the middle period. The Sens would take a 3-2 lead just 4:26 later and would push the lead to 4-2 with just over three minutes to go in the 3rd period. Ryan Pulock would make things interesting at 4-3 with just two minutes to go, but that’s as close as New York would get as the Senators closed the door on any comeback attempt the rest of the way. Semyon Varlamov got the loss, falling to 19-14-5 on the year after giving up 4 goals on 29 shots faced in the losing effort.

Normally I’m all about the value in spots like these as I’m not trying to lay juice with an Islanders team that’s lost 5 in a row against a Hurricanes team that’s won the last 7 meetings with New York. However, the goaltending situation in Carolina is a disaster right now and I’m not getting enough plus money to take a flyer on a goaltender in Nedeljkovic that’s just in a bad spot, being forced into the big league crease before he’s really ready. I think this is a perfect opportunity for the Islanders to get a bounce-back win, so I’ll lay the juice with the Islanders here.