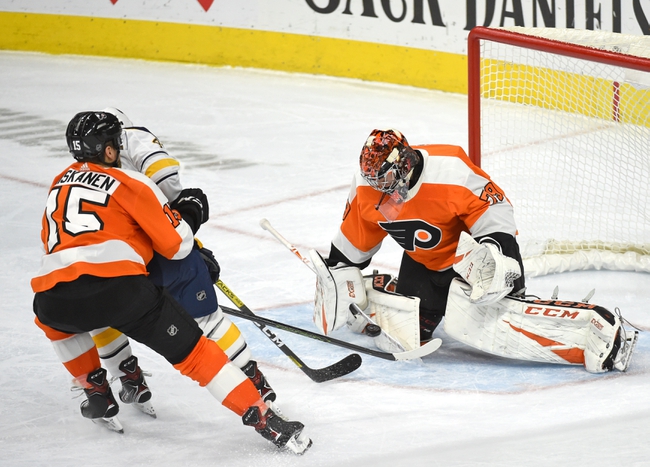 The Buffalo Sabres and the Philadelphia Flyers meet in NHL action from the Wells Fargo Center on Saturday night.

The Buffalo Sabres will be out to snap a five-game losing streak after a 4-2 loss to the Pittsburgh Penguins in their last outing. Jake McCabe and Marcus Johansson were the two goal-scorers for Buffalo in the losing effort while Dominik Kahun and Rasmus Dahlin each had an assist. Kyle Okposo led the Sabres with 4 shots on goal in the defeat followed by Jack Eichel’s 3 shots on goal and a bunch of Buffalo players with a pair of shots on net in the loss. Jonas Johansson took the loss, falling to 1-3-1 on the year after giving up 4 goals on 32 shots faced in the losing effort.

The Philadelphia Flyers will try to add to their impressive eight-game winning streak after picking up a 4-1 win over Carolina last time out. Ivan Provorov, Michael Raffl, Nicolas Aube-Kubel and Sean Couturier each found the back of the net for the Flyers in the winning effort while Scott Laughton added a pair of assists. Claude Giroux also led the Flyers with a total of 5 shots on goal in the winning effort despite just having an assist to show for his efforts. Carter Hart picked up the win in goal for Philadelphia, improving his record to 23-12-3 on the year after stopping 28 of 29 shots faced in the victory for the home team.

This seems like the perfect storm for me to bet on Saturday. You have the ice-cold Sabres on the road where they’ve been a profitable fade for some time now, going to play a Philadelphia team that’s been pretty much money on home ice all season long and is on fire right now. I’m expecting Carter Hart to get the nod in goal for the Flyers and if he does, this becomes my stronger play on the board for Saturday. Hart is 19-2-2 at home this season with a 1.64 GAA and a .942 save %. That’s downright nuts. Give me Philadelphia on the puck line for some extra value out of the wager.