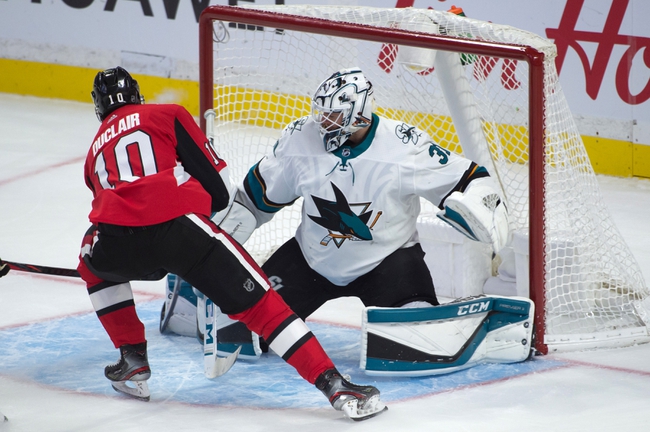 The Ottawa Senators and the San Jose Sharks meet in NHL action from the SAP Center on Saturday.

The Ottawa Senators come into this game looking to build on a 4-3 win over the New York Islanders last time out. Four different Senators got on the goal scoring sheet with Brady Tkachuk, Anthony Duclair, Connor Brown and Mikkel Boedker each logging a goal, with Duclair leading the Senators with 6 shots on goal while Brown had 5 shots on target and Nikita Zaitsev and Thomas Chabot each had 4 shots on goal in the victory. Craig Anderson got the win in goal to improve his record to 10-16-2 on the year after stopping 37 of 40 shots faced in the winning effort.

The San Jose Sharks will look for a bounce back performance after a 3-2 loss to Minnesota in their last outing. Joe Thornton and Stefan Noesen finished the game as the goal-scorers for San Jose in the losing effort while Timo Meier had an assist and a team-high 8 shots on goal in the defeat. Evander Kane had 5 shots on goal while the aforementioned Noesen and Logan Couture each had 4 shots on goal in the loss. Martin Jones took the L in goal, falling to 17-20-2 on the year after giving up all 3 goals on 27 shots faced in the losing effort.

Normally between a pair of teams that aren’t going to the playoffs, I’m not trying to lay steep prices like these. However, Ottawa is pretty much unbackable on the road as the bulk of their success has come at home this season and while San Jose isn’t going anywhere in a few weeks either, the Sharks are playing better and usually play well at home anyways. I’ll side with the Sharks to get the job done in regulation to get the price down.