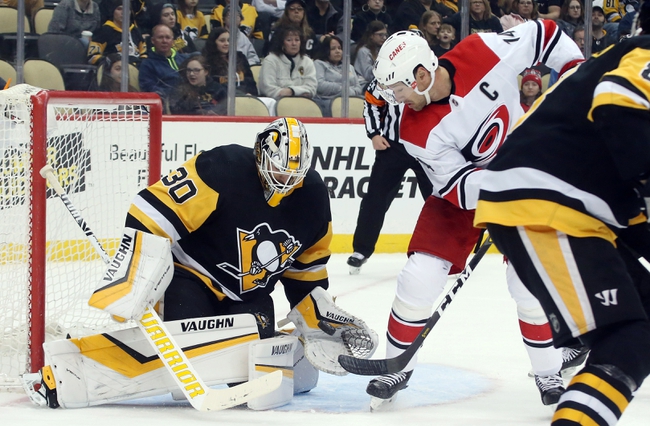 The Carolina Hurricanes and the Pittsburgh Penguins meet in NHL action from the PPG Paints Arena on Sunday afternoon.

The Carolina Hurricanes will look to build on a 3-2 overtime win over the Islanders in their last outing. Justin Williams and Joel Edmundson got on the score sheet in regulation, with Williams logging a team-high 8 shots on target, while Vincent Trocheck scored the OT winner for his new team just 1:36 into the extra period. Andrei Svechnikov has a pair of helpers while Haydn Fleury, Sebastian Aho and Teuvo Teravainen had an assist each as well in the victory for the ‘Canes. Between the pipes, Anton Forsberg picked up his first win to even up his record at 1-1-0 after stopping 24 of the 26 shots faced in the winning effort.

The Pittsburgh Penguins come into this game looking to rebound from a 5-2 loss to the rival Washington Capitals in their last outing. Sidney Crosby led the way with a goal and an assist while Evgeni Malkin also has a goal as well as a team-high 5 shots on target in the losing effort. Jason Zucker had an assist and 4 shots on goal while Conor Sheary added an assist and Patric Hornqvist also has 4 shots on goal as well in the defeat. Matt Murray ended up taking the loss in goal, knocking his record back to 19-11-5 on the year after allowing all 5 goals on 28 shots faced in the losing effort.

I get why the plus money would be tempting now that Carolina’s off of the schneid and Pittsburgh’s in on a back-to-back after a tough loss to Washington on Saturday. However, I’m still not a fan of Carolina right now with their issues in goal and I’m also not trying to get behind Alex Nedeljkovic as a starter, at least not against this talented Pittsburgh lineup. I think the Pens know that they’re better than the recent play would indicate, and I think Pittsburgh comes out and shows it here so I’ll lay the juice with Pittsburgh at home here.