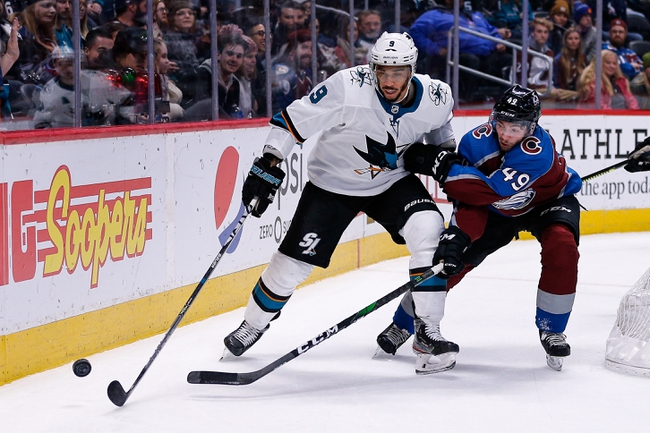 The Colorado Avalanche and the San Jose Sharks meet in NHL action from the SAP Center on Sunday night.

The Colorado Avalanche will look to rebound from back-to-back losses after a 6-3 loss to Vancouver in their last outing. Erik Johnson and Gabriel Landeskog each had a goal and an assist with 3 shots on goal while Valeri Nichushkin added a goal and Nathan MacKinnon had a pair of assists with 4 shots on goal. Pavel Francouz got beat up a little bit, taking the loss in goal for the Avalanche here, allowing 5 goals on 24 shots to fall to 19-6-4 on the year with the defeat.

The San Jose Sharks will also be looking to bounce back from consecutive losses after a 2-1 loss to Ottawa last time out. Evander Kane scored the lone goal for San Jose in the losing effort with 4 shots on goal while Timo Meier and Brent Burns each had an assist on the goal as well as a team-high 5 shots on goal in the defeat. Kevin Labanc also chipped in a team-high 5 shots while the aforementioned Burns along with Dylan Gambrell were the only two San Jose platers to finish with a -2 rating in the loss. Aaron Dell took the loss, falling to 12-14-3 on the year after allowing both goals on 38 shots faced in the losing effort.

I’m tempted by a home dog on most nights, and San Jose had been stepping up their play at home lately. However, the Sharks are back to faltering, and a loss to Ottawa at home really doesn’t do a whole lot for my confidence. Colorado has had issues lately as well and have been owned by the Sharks in San Jose over the years, but the Avalanche are just the much better team in a much better position and realistically are the only team here that will be playing playoff hockey in a couple of weeks. I’ll side with Colorado to pick up a key win and two points on the road in this one.