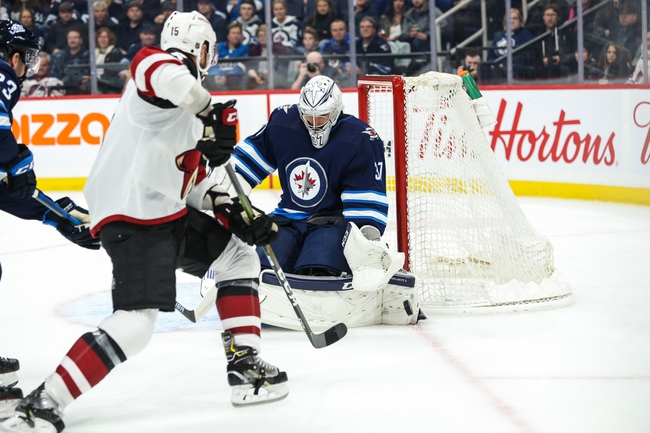 The Arizona Coyotes and the Winnipeg Jets meet in NHL action from the Bell MTS Place on Monday night.

The Arizona Coyotes will look to rebound after a 3-2 loss to the Calgary Flames in their last outing which left the ‘Yotes two points out of the second wild card spot. Taylor Hall led the charge for Arizona with a goal and an assists as well as a team-high 8 shots on goal while Carl Soderberg also got his name on the score sheet with a goal as well as 4 shots on goal. Oliver Ekman-Larsson and Clayton Keller each had an assist while Phil Kessel also chipped in 4 shots on target as well in the loss. Darcy Kuemper ended up with the loss, dropping his record back to 16-10-2 on the year after allowing 3 goals on 34 shots faced in the defeat.

The Winnipeg Jets come into this game looking to build on back-to-back after a 4-0 win over the Vegas Golden Knights to put the Jets in a tie for the second wild card spot coming into this game. Patrik Laine and Nikolaj Ehlers each had a goal and an assist while Kyle Connor and Mathieu Perreault found the back of the net as well for Winnipeg in the victory. Connor Hellebuyck was rock solid in the win, picking up the victory to improve his record to 29-21-5 on the year after stopping all 29 shots faced in the winning effort for his 6th shutout of the season, leading the league in that department.

I think you could honestly make a case for either side in this one as the game just has major playoff implications and I’m sure neither side will want to give an inch here. Instead of trying to split hairs between the two, I’m going to side with the under. Both of these teams have been involved in lower-scoring games as of late, and with so much at stake here, I think both side take a more tentative approach and we see a tighter and more physical, playoff-style if you will, kind of hockey here. I’ll take the under.