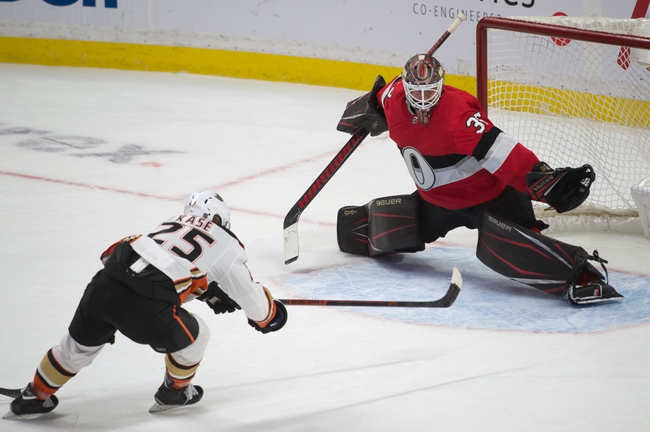 The Ottawa Senators and the Anaheim Ducks meet in NHL action from the Honda Center on Tuesday night.

The Ottawa Senators will look to build on back-to-back wins after a 2-1 overtime win over San Jose last time out. Nick Paul opened the scoring for Ottawa just past the midway point of the 1st period and Chris Tierney scored the OT winner to make up the goal-scoring for Ottawa in the win. Anthony Duclair had a pair of assists while Thomas Chabot and Jayce Hawryluk each had an assist as well in the victory. Craig Anderson picked up the win in goal to improve to 11-16-2 on the year after stopping 31 of 32 shots faced in the winning effort.

The Anaheim Ducks come into this game looking for a bounce-back performance after a 5-4 overtime loss to Minnesota in their last outing. Jakob Silfverberg led the Ducks with two goals and an assist with a team-high 5 shots on goal while Danton Heinen and Christian Djoos each got on the score sheet as well for the Ducks. Rickard Rakell posted a team-high 3 assists while Ryan Getzlaf, Sonny Milano and Jacob Larsson each had an assist as well in the losing effort. Ryan Miller took the loss, falling to 8-6-4 after allowing all 5 goals on 30 shots faced in the losing effort.

The Senators have had issues playing in Anaheim over the years and Ottawa hasn’t been good on the road, but I’m not laying juice with an Anaheim team that’s going nowhere fast and has a date with St. Louis on a back-to-back on Wednesday, leaving them in a prime look-ahead spot here. Ottawa’s been playing better lately, winning 4 out of their last 5 games, and they could provide some value so I’ll take a shot with Ottawa and the plus money. This game features two of the league’s worst offensive teams as well, so I’ll take my chances with the under also as I could easily see this being a 2-1 or 3-2 type of game.