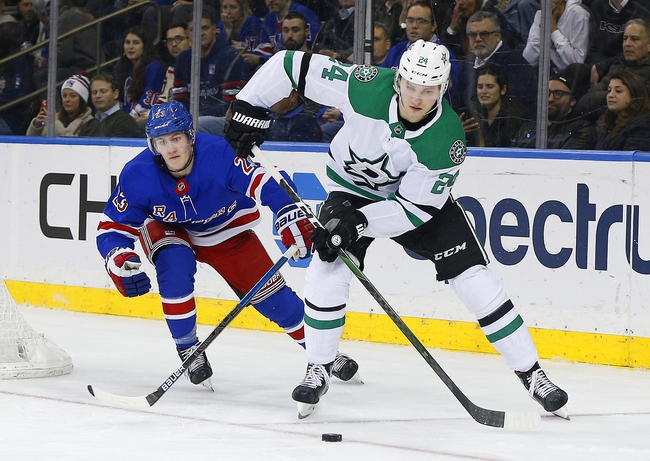 The New York Rangers and the Dallas Stars meet in NHL action from the American Airlines Center on Tuesday night.

The New York Rangers will look for a bounce back performance after a 6-4 loss to the New Jersey Devils in their last outing. Gregg McKegg had a goal and an assist for the Rangers while Tony DeAngelo, Mika Zibanejad and Filip Chytil each got on the score sheet as well. Pavel Buchnevich and Adam Fox each had a pair of assists with Buchnevich logging 4 shots on goal. Brendan Lemieux led the Rangers with 5 shots on goal while Phil Di Giuseppe also had 4 shots on goal in the losing effort. Igor Shesterkin took the loss, falling to 9-2-0 on the year after allowing all 5 goals on 23 shots faced in the losing effort.

The Dallas Stars will be out to snap a five-game losing streak after a 1-0 loss to the Nashville Predators in their last outing. Tyler Seguin led the Stars with 6 shots on goal while John Klingberg, Roope Hintz and Miro Heiskanen each had 4 shots on goal as the Stars outshot the Predators 37-23 in the losing effort, including 14-5 in the 3rd period but the Stars wouldn’t be able to break through the Predators’ goal for the 2nd time in 3 days. Ben Bishop took the loss, falling to 21-15-4 on the year after giving up the lone goal on 23 shots faced in the losing effort.

I get that the Stars are due for a win and maybe it could come here at home, but I’m not laying this kind of juice with a Dallas team that’s lost 5 straight coming into this one. New York has been playing as well as any team in the league over the last month or so to fire themselves right back into the playoff hunt in the East and are worth at least a flyer at this price so I’ll take a shot with the Rangers at plus money.