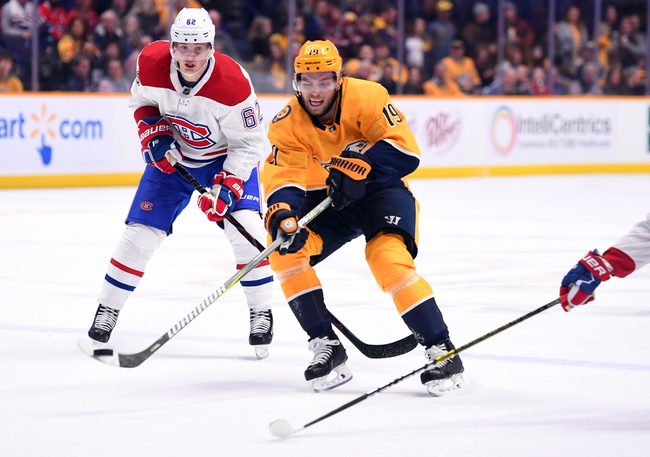 The Nashville Predators and the Montreal Canadiens meet in NHL action from the Bell Centre on Tuesday night.

The Nashville Predators come into this game looking to build on back-to-back shutouts of the Dallas Stars, picking up a 1-0 win in their last outing. Ryan Ellis had Nashville’s lone goal in the 2nd period and the foal had assists from Matt Duchene and Viktor Arvidsson. Filip Forsberg led the Preds with 5 shots on goal while Mattias Ekholm and Craig Smith each had 3 shots on target. Juuse Saros picked up his 2nd straight shutout and 4 shutout of the season after stopping all 37 shots faced in the winning effort to improve to 16-12-4 on the year.

The Montreal Canadiens will try to rebound from back-to-back losses after a 4-1 defeat at the hands of the Florida Panthers in their last outing. Jake Evans’ 3rd period marker for the Habs was unassisted and would be the only dent that Montreal would put on the scoreboard in the losing effort while Jordan Weal, Shea Weber and Phillip Danault each had a team-high 4 shots on goal in the loss. Charlie Lindgren ended up with the loss between the pipes for the Canadiens, dropping his record to 2-4-0 on the year after allowing 3 goals on 31 shots faced in the defeat.

I considered Montreal and the cheap price as the Habs are definitely a desperate team watching their playoff hopes fade by the day. However, Nashville is on the outside looking in as well, but the Predators are at least in the fight, sitting one point out of the second wild card spot heading into this one and I just think the Predators are the team in better form. I’m just done with Montreal. I’ll lay the juice with Nashville here.