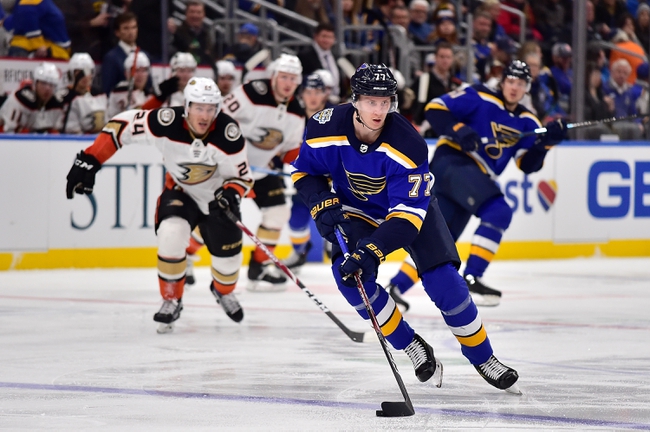 The St. Louis Blues and the Anaheim Ducks meet in NHL action from the Honda Center on Wednesday night.

The St. Louis Blues will look to bounce back after a 2-1 loss to the Florida Panthers in their last outing. Colton Parayko had the lone goal for St. Louis coming just past the midway point of the 2nd period with the assist coming to Robert Thomas. Parayko, Justin Faulk, Marco Scandella and Alex Pietrangelo each had a team-high 3 shots on goal apiece in the losing effort for the Blues. Jordan Binnington ended up with the loss in goal for the Blues, falling to 30-13-7 on the year after giving up both goals on 34 shots faced in the losing effort.

The Anaheim Ducks come into this game looking to build off of a 5-2 win over the Ottawa Senators in their last outing. Nicolas Deslauriers led the way with a natural 1st period hat trick while Rickard Rakell had a goal and an assist and Jakob Silfverberg added a goal of his own as well. David Backes and Carter Rowney each had a pair of assists as well while the aforementioned Deslauriers led the Ducks with 3 shots on goal as the Ducks managed 5 goals on 15 shots, being outshot 42-15 in the winning effort. Ryan Miller got the win in goal for Anaheim, improving to 9-6-4 on the year after stopping 40 of 42 shots faced in the winning effort.

St. Louis has had their fair share of issues in Anaheim over the years, but the fact here is that the Blues are heads and shoulders the better team side-by-side in this one, and a win over a bad Ottawa team at home doesn't move the scale a whole lot for me either. This is a game that St. Louis should control from start to finish, so I'll side with the Blues on the puck line here.