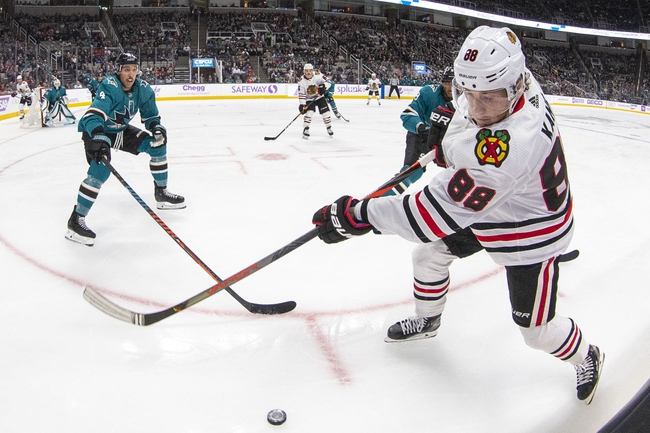 The San Jose Sharks and the Chicago Blackhawks meet in NHL action from the United Center on Wednesday night.

The San Jose Sharks will be out to snap a three-game losing streak after a 4-3 loss to the Colorado Avalanche in their last outing. Melker Karlsson, Joe Thornton and Noah Gregor each got on the score sheet for San Jose in the losing effort while Timo Meier had a pair of assists and Martin Sorensen, Kevin Labanc and Evander Kane each had a helper as well with Kane leading the Sharks with 5 shots on goal in the loss. Martin Jones ended up with the loss between the pipes for the Sharks, falling to 17-21-2 on the year after allowing all 4 goals on 24 shots faced in the losing effort.

The Chicago Blackhawks will be looking to rebound from back-to-back losses after a 2-0 loss to the St. Louis Blues in their last outing. Chicago outshot St. Louis 29-26 in the game, led by 7 shots on goal from Patrick Kane as well as 4 shots on goal from Alex DeBrincat and 3 shots on target apiece from Dylan Strome and Alex Nylander. Corey Crawford took the hard luck loss in defeat, falling to 15-20-3 on the year after giving up both goals on 26 shots faced in the losing effort for Chicago.

I considered San Jose and the plus money given the Sharks’ success in this matchup, but the problem is that the Sharks can’t win on the road right now, and they’re facing a desperate Chicago team that’s running out of time to salvage their thin playoff hopes. It’s now or never for Chicago, and while I’m not a fan of the price, I think Chicago has to be the play here as their season in my opinion is on the line here.