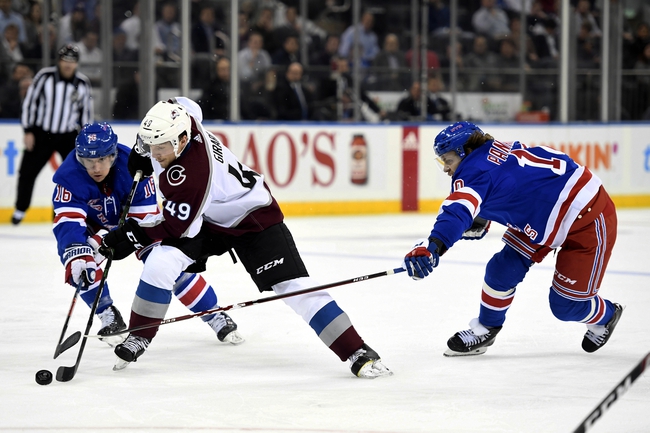 The New York Rangers and the Colorado Avalanche meet in NHL action from the Pepsi Center on Wednesday night.

The New York Rangers will be looking to build on a 4-2 win over the Dallas stars in their last outing. Kaapo Kakko led the Rangers with a pair of goals while Adam Fox and Mika Zibanejad each had a goal and an assist with Zibanejad logging a team-high 4 shots on goal in the win. Kakko, Brendan Lemieux and Phil Di Giuseppe each had 3 shots on goal apiece in the winning effort for New York as well. Igor Shesterkin continued his hot start in goal, improving to 10-2-0 on the year after stopping 31 of the 33 shots faced in the winning effort.

The Colorado Avalanche will look to rebound from a 3-1 loss to the Los Angeles Kings in their last outing. Pierre-Edouard Bellemare had Colorado’s lone goal while Ian Cole chipped in the only assist to round off Colorado’s damage on the scoreboard in the losing effort. Valeri Nichushkin and Ryan Graves each had a team-high 3 shots on goal as well in the defeat. Pavel Francouz took the loss in goal, falling to 20-7-4 on the year after allowing 3 goals on 35 shots faced in the losing effort.

Head-to-head, the home team is 4-0 in the last 4 meetings between these two teams.

I get the Avs being favored at home and catching the Rangers on the end of a back-to-back, but the Avs will most likely be without Nathan MacKinnon for this one, and while one guy doesn’t make up a whole team, he is a big part of how Colorado operates offensively. New York continues to pick up wins left and right and continue to be profitable for us in an underdog role, so I’ll take a shot with the Rangers and the plus money in this one.