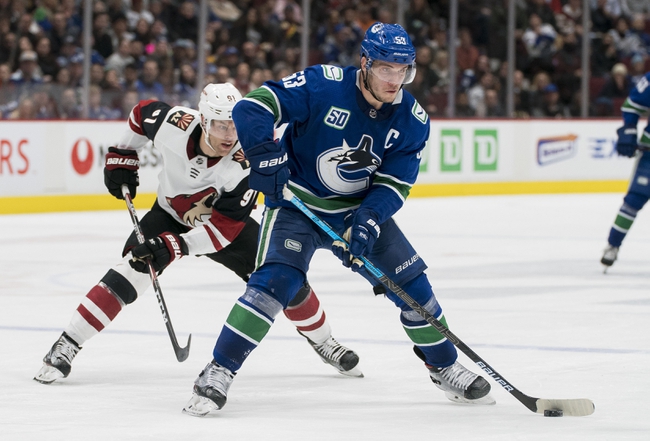 The Vancouver Canucks and the Arizona Coyotes meet in a Pacific division tilt in NHL action from the Gila River Arena on Thursday night.

The Vancouver Canucks will try to build on their 5-4 shootout win over the New York Islanders in their last outing. Tyler Toffoli led the charge with a goal and an assist while Adam Gaudette, Bo Horvat and Zack MacEwen each had a goal as well in the victory with Alex Edler logging a pair of assists and J.T. Miller putting out an assist and the shootout winner, the lone goal-scorer in six shootout attempts in the win.  Thatcher Demko got the win in goal to improve to 13-10-2 on the year after stopping 45 of 49 shots faced in the winning effort.

The Arizona Coyotes will try to rebound from back-to-back losses after a 4-2 defeat at the hands of Winnipeg last time out. Nick Schmaltz led the charge for the Coyotes, accounting for both Arizona goals while Phil Kessel had a pair of assists and Jason Demers and Carl Soderberg each had an assist. Kessel, Soderberg and Taylor Hall each had a team-high 6 shots on goal as well in the defeat. Darcy Kuemper got the loss, falling to 16-11-2 on the year after stopping 3 of 33 shots faced in the losing effort.

I am really tempted by Vancouver and the plus money, but the problem for the Canucks is that their stellar play at home hasn’t transferred to their efforts on the road and that’s not good against an Arizona team that’s in the playoff hunt themselves and need to keep stringing wins together to keep any sort of playoff hope alive. I’ll lay the juice with Arizona at home here.

The pick in this article is the opinion of the writer, not a Sports Chat Place site consensus.
Previous Pick
Calgary Flames vs. New York Islanders - 3/12/20 NHL Pick, Odds, and Prediction
Next Pick
What's The NHL Record For Most Game Winning Goals Scored In A Season?