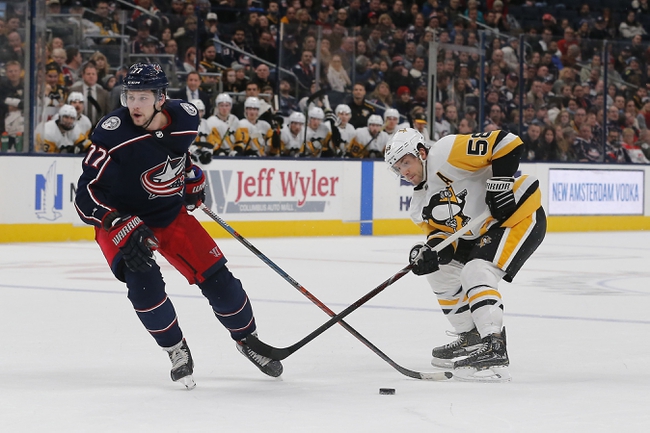 The Pittsburgh Penguins and the Columbus Blue Jackets meet in a Metropolitan division matchup in NHL action from the Nationwide Arena on Thursday night.

The Pittsburgh Penguins will look to build on a 5-2 win over the New Jersey Devils in their last outing. Evgeni Malkin led the charge with two goals and an assist while Kris Letang had a goal and an assist as well. Justin Schultz and Evan Rodrigues also got their names on the score sheet while Bryan Rust and Jared McCann each had an assist. Malkin, Schultz and Patric Hornqvist each had a team-high 4 shots on goal as well in the victory for Pittsburgh. Matt Murray got the win to improve to 20-11-5 on the year after stopping 20 of 22 shots faced in the winning effort.

The Columbus Blue Jackets will look to build on a 2-1 win over the Vancouver Canucks in their last outing. Eric Robinson and Emil Bemstrom each had a goal for the Jackets, while Vladislav Gavrikov, David Savard, Pierre-Luc DuBois and Alexander Wennberg each had an assist as well in the loss. Bemstrom also led Columbus with 5 shots on goal in the losing effort. Elvis Merzlikins got the win to improve to 13-9-8 on the year after stopping 26 of 27 shots faced in the winning effort.

I can’t figure out these Penguins, but I’ll tell you, they’re still a talented team that’s just in a bit of a rough patch and the timing only amplifies the issues. Columbus on the other hand, has to deal with the effects of the Coronavirus and now has no real home ice advantage to feed off as there will be no fans attending the game. All in all, this just seems like a decent spot for the Penguins to get back on track and I think that they’re the better team here so I’ll lay the juice with Pittsburgh on the road here.