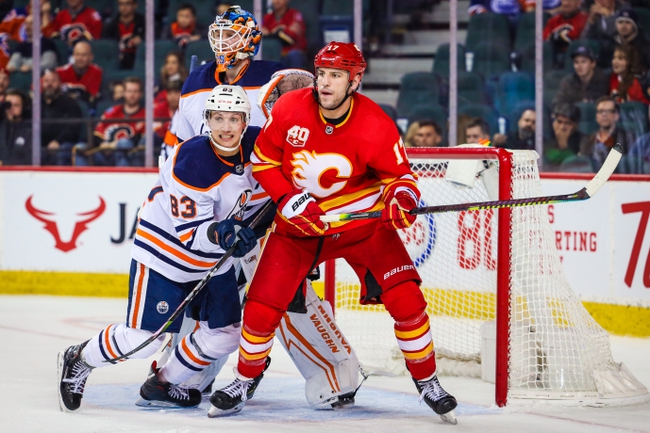 The Edmonton Oilers and the Calgary Flames meet in an NHL preseason matchup from Rogers Place on Tuesday night.

The Edmonton Oilers enter the bubble as the 5th seed in the Western Conference after entering the pause with a record of 37-25-9, sitting on 83 points with a points percentage of .585. The Oilers started the year with a 3-2 win over Vancouver as part of a 5-game winning streak in which the Oilers came from behind in every game, setting an NHL record. The Oilers had a solid season up to the pause in mid-March, with all but one month in December seeing the Oilers finish the month at .500 or better over that span. It was a two-man show in Edmonton for much of the season, with Leon Draisaitl leading Edmonton with 110 points, 43 goals and 67 assists as well as team-highs of 16 power play goals and 44 power play points. Captain Connor McDavid wasn’t far behind with 97 points, including 34 goals and 63 assists with 11 power play goals and 43 power play points this season. Mikko Koskinen and Mike Smith also shared goaltending duties this season, with Koskinen posting an 18-13-3 record with a 2.75 GAA and a .917 save percentage while Mike Smith had a 19-12-6 mark with a 2.95 GAA and a .902 save percentage this season.

The Calgary Flames on the other hand, enter the bubble as the #8 seed, sitting on 79 points with a point percentage of .564 and a record of 36-27-7 this season. The Flames seasonstarted fairly well, but it got bumpy in late-November when the team was forced to part ways with head coach Bill Peters following racial slur allegations. Geoff Ward took over the team on an interim basis and it seems to rejuvenate the Flames as Calgary went 14-7-2 over December and January. February was tough as the Flames dropped 5 of 6 games at home but started March 3-1-0 before the NHL was forced to halt. Matthew Tkachuk leads the Flames with 61 points this season as well as sitting tied for the team lead with 19 power play points. Elias Lindholm has a team-high 29 goals with 8 power play goals and 19 power play points while Johnny Gaudreau has a team-leading 40 assists and 18 power play points this season. David Rittich saw the bulk of the workload in goal, posting a 24-17-6 record with a 2.97 GAA and .907 save percentage while Cam Talbot posted a backup record of 12-10-1 with a 2.63 GAA and .919 save percentage.

This may be an exhibition/warmup game, but rest assured these two teams still do not like each other. With that said, even with a layoff, I expect to see some scoring here. The four meetings in the regular season combined for 31 goals and I do expect the two sides to get their scoring sides back. I’ll side with the over here as long as it’s not too crazy once the lines are released.