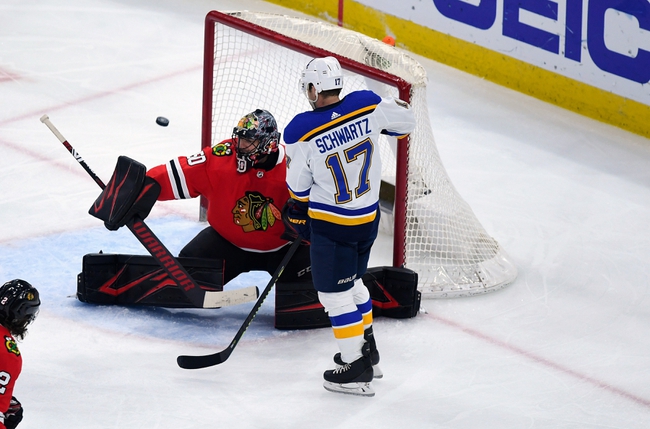 The St. Louis Blues and the Chicago Blackhawks meet in an NHL exhibition matchup from Rogers Place on Wednesday afternoon.

The St. Louis Blues come into the bubble as the top team in the Western Conference, sitting on 94 points and a record of 42-19-10 with a points percentage of .662 this season. The Blues started their title defense on the right foot before rattling off a strong month of November where the Blues earned at least a point in 13 of 15 games. The Blues posted a 3rd straight winning month in December, before hitting a bump patch in January but it smoothed out heading into the unexpected pause due to the COVID-19 pandemic. When the league paused in March, Ryan O’Reilly led the Blues with 61 points, including a team-high 49 assists while David Perron and Brayden Schenn each had a team-high 25 goals with Perron adding 35 assists for his 60 points with a team-high 27 points on the power play while Schenn had a team-leading 10 power play goals. Jaden Schwartz added 22 goals and 35 assists and captain Alex Pietrangelo has 52 points. Jordan Binnington saw the bulk of the work in goal, posting a record of 30-13-7 and a 2.56 GAA with a .912 save percentage while Jake Allen had a record of 12-6-3 with a 2.15 GAA and a .927 save percentage this season.

The Chicago Blackhawks on the other hand, benefitted from the adjusted playoff format, sneaking into the playoffs as the #12 seed with a record of 32-30-8 for 72 points with a points percentage of .514. The Blackhawks played a lot of win one, lose one hockey for much of the season, failing to finish a month better than two games above .500 up until the league was forced to pause in mid-March. The good news was the season ending and the altered format meant a playoff spot for the Blackhawks for the first time since the 2016-17 season. When play stopped, Patrick Kane led the Blackhawks with 84 points, including team-highs of 33 goals and 51 assists with 23 power play points and 8 power play goals. Jonathan Toews added 60 points with 42 assists and Alex DeBrincat had a team-high 10 power play goals. Corey Crawford split time in Chicago’s goal with Robin Lehner, but Lehner was traded to Vegas, leaving Crawford to take over in goal with a record of 16-20-3 and a 2.77 GAA with a .917 save percentage in the regular season.

This will be an interesting game to watch as you have the Blues who are preparing to defend their crown against a Blackhawks team that know how lucky they are to be in the playoffs and will want to get tuned up for a high octane series against Edmonton. With that said, I think there’s going to be a learning curve and while the exhibition game tends to lend itself to offense, I think we see the teams focus on tightening up defensively so I’ll side with the under as my free pick for this game, but I have a premium pick on the side that you can find here.