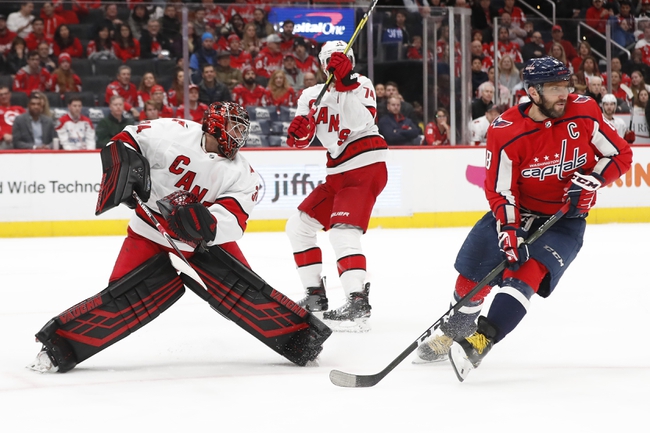 The Carolina Hurricanes and the Washington Capitals meet in an NHL exhibition game from Scotiabank Arena on Wednesday afternoon.

The Carolina Hurricanes come into the NHL bubble as the 6th seed in the Eastern Conference on 81 points with a points percentage of .596 and a record of 38-25-5 this season. The ‘Canes had a tough act to follow in Rod Brind’Amour’s second year as head coach of Carolina, but he was doing the job for the first three minutes with Carolina coming into the 2020 calendar year with three straight winning months from October to December. The Hurricanes sputtered here and there, but pretty much held onto a playoff spot for the duration of the season until the league-wide stoppage for COVID-19 in mid-March. Sebastian Aho leads Carolina with 38 goals, 66 points and 8 power play goals while Teuvo Teravainen has 63 points with a team-high 48 assists and 21 power play points and Andrei Svechnikov has 61 points with 24 goals and 37 assists this season. Petr Mrazek saw the bulk of the work in goal, posting a 21-16-2 record and a 2.69 GAA with a .905 save percentage while James Reimer has a 2.66 GAA and .914 save percentage to go along with a 14-6-2 record.

The Washington Capitals come in as one of the top four seeds in the Eastern Conference with a record of 31-20-8 for 90 points with a .652 points percentage, meaning the Caps will enter the round robin tournament to determine the top four seeds for the second round of the Stanley Cup Playoffs. The Caps were rolling through the first two months of the season with a record of 19-4-5 at the beginning of the December and posted winning months in December and January but they’d hit a bumpy patch from February up until the league pause in mid-March. The shortening of the regular season however, meant a 5th straight Metropolitan division title for the Capitals. John Carlson leads Washington with 75 points and a team-high 60 assists with 26 power play points, while Alex Ovechkin had a team-high 48 goals as part of his 67-point campaign with a team-high 13 power play goals. Braden Holtby saw the bulk of the goaltending duties with a 25-14-6 record, including a 3.11 GAA and an .897 save percentage. Ilya Samsonov posted a 16-6-2 record as the backup, but won’t join Washington in the bubble.

This should be an interesting game as Carolina has a series to prepare for while the Capitals are fighting for a top seed in the round robin tournament. With that said, the two sides split the four regular season meetings, but Washington came on strong with a pair of wins in the last two meetings. I also think that even with Holtby being relied on to carry the goaltending load for Washington, that the Capitals are the better team here, so I’ll back Washington for the win in this one.