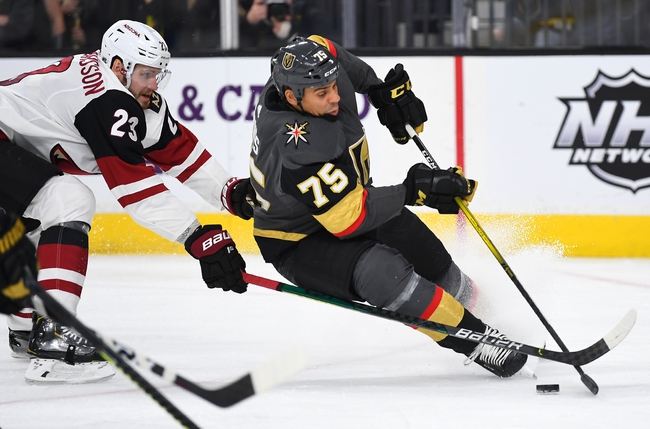 The Vegas Golden Knights and the Arizona Coyotes meet in an NHL preseason game from Rogers Place on Thursday night.

The Vegas Golden Knights enter this game as the 3rd seed in the Western Conference, sitting on 86 points with a record of 39-24-8 and a points percentage of .606. Vegas played good month, bad month all season long, starting with an 8-51 mark in October and then sub-.500 hockey for the month of November. December? 9-6. January? 4-6. February saw the Knights rattle off a run of 10-2-1, playing some of their best hockey of the season at that point before the NHL paused due to the Coronavirus pandemic. Max Pacioretty led the Golden Knights with 66 points and a team-high 32 goals while also boasting a team-high 19 power-play points and 8 power-play goals. Mark Stone had 63 points with a team-high 42 assists and 17 power-play points. Marc-Andre Fleury saw the bulk of the workload in goal for Vegas, boasting a 27-16-5 record and a 2.77 GAA with a .905 save percentage.

The Arizona Coyotes were one of the teams to benefit from the NHL’s adopted playoff format, sitting as the #11 seed in the West with a record of 33-29-8 and 74 points with a point percentage of .529 this season. Arizona started the season well, going 7-4-1 in October, but played .500 hockey over the next two months while still hovering around the top of the Pacific division. January saw Arizona go 4-5-2 and February 6-6-2, leaving the Coyotes on the outside looking in when the league paused in mid-March, but the ‘Yotes were given a lifeline when the NHL adopted their new playoff format for the 2020 season. Nick Schmaltz led the Coyotes with 45 points, including a team-high 34 assists while Clayton Keller has 44 points and Conor Garland has a team-high 22 goals this season. Darcy Kuemper and Antti Raanta split the goaltending duties for Arizona, with Kuemper going 16-11-2 with a 2.22 GAA and .928 save percentage while Raanta went 15-14-3 with a 2.63 GAA and .921 save percentage this season.

This should be an interesting game considering that the Coyotes will finally be healthy in the crease while Vegas was playing as well as any team coming into the break. With that said, the one thing these two teams have in common is that they play stingy defense for the most part, as we saw in the three head-to-head games that had five goals or less scored in all three. I think we’re in for another defensive battle here so I’ll side with the under as my free pick for this game but I also have a stronger play on the side that’s available as a premium pick that you can find here.