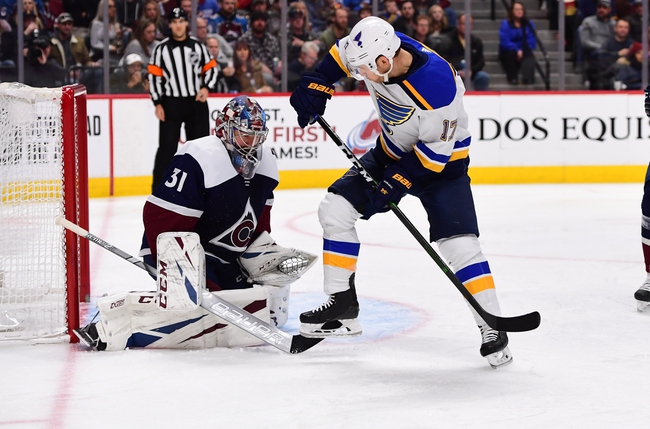 The St. Louis Blues and the Colorado Avalanche meet in a round robin matchup in NHL action from Rogers Place on Sunday afternoon.

The St. Louis Blues come into the playoffs as the top team in the Western Conference standings, sitting with 94 points and a record of 42-19-10 with a point percentage of .662 this season. This playoff berth marks the 8th playoff spot in the last 9 seasons for the Blues a year removed from the first Stanley Cup in franchise history. Ryan O’Reilly led the Blues with 61 points including a team-high 49 assists while David Perron and Brayden Schenn each had a team-high 25 goals. Perron had 60 points with a team-high 27 power play points while Schenn had 33 assists and a team-high 10 power play goals. Jordan Binnington saw the bulk of the workload in goal for the Blues, posting a 30-13-7 mark with a 2.56 GAA and a .912 save percentage while Jake Allen served as backup with a 12-6-3 mark with a 2.15 GAA and .927 save percentage this season

The Colorado Avalanche enter the playoffs as the #2 seed in the West, sporting a record of 42-20-8 with a .657 point percentage this season. The playoff berth marked the third straight year that the Avs were headed to the postseason, lad by Hart trophy candidate Nathan MacKinnon who posted MVP-caliber numbers of 35 goals and 58 assists with a team-high 12 power play goals and 31 power play points this season. Cale Makar is also a Calder trophy candidate as a potential rookie of the year with 50 points and 38 assists while Andre Burakovsky and Gabriel Landeskog each had 20-goal seasons for the Avs this year. Pavel Francouz and Philipp Grubauer split the workload in goal for Colorado this season with Francouz posting a record of 21-7-4 with a 2.41 GAA and .923 save percentage while Grubauer went 18-12-4 with a 2.63 GAA and .916 save percentage this season.

Head-to-head, the Blues are 15-5 in the last 20 meetings between these two teams.

These round robin games were always going to be tough to call as you have the best of the best from each conference fighting for playoff positioning. With that said, while the goaltending on both sides has been stellar, that hasn’t stopped the two sides from combining for at least seven goals in three of the four head-to-head meetings this season. I know playoff hockey is a different animal, but these two teams like to score on each other, so I’ll take my shot with the over as my pick for this game.