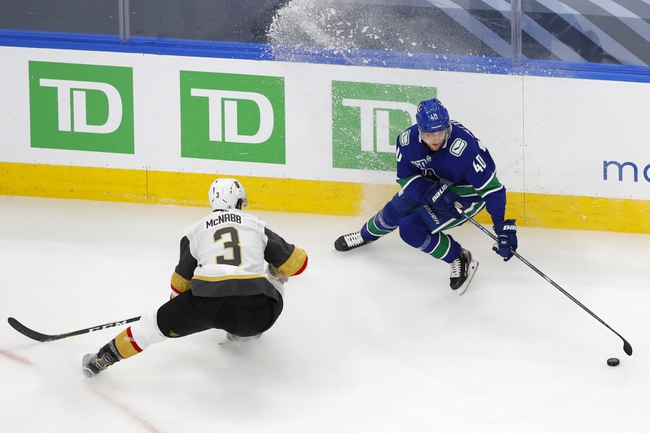 The Vegas Golden Knights and the Vancouver Canucks meet in game four of their best-of-seven Western Conference semi-final matchup in NHL action from Rogers Place on Sunday.

The Vegas Golden Knights will try to surge ahead in the series 3-1 after re-taking the series lead thanks to a 3-0 win over Vancouver in game three on Saturday.

Alex Tuch opened the scoring for the Golden Knights just over four minutes into the opening frame before Zach Whitecloud lit the lamp to make it a 2-0 Vegas lead just 1:23 later. The 2-0 score held through the rest of the first and all of the second before Mark Stone pushed Vegas’ lead to 3-0 on the power play just over two minutes into the 3rd and Vancouver simply wouldn’t have an answer for anything Vegas did on the board over the entire 60 minutes, leaving the Golden Knights to walk away with the win and the shutout as well as a huge series lead going into game four.

Robin Lehner got the win for Vegas in net after stopping all 31 shots faced for the shutout win to improve to 7-2 this postseason while Jacob Markstrom took the loss, falling to 8-5 in the playoffs after allowing 3 goals on 34 shots in the losing effort for Vancouver.

The plus money with Vancouver held some weight in game three on a back-to-back right after Vancouver tied the series at one, but then the postponement happened killing that momentum, and even worse, the Golden Knights won game three with the back-to-back happening here and the Canucks have had little success on the second half of a back-to-back. Vegas looked focused in game three and when the Golden Knights are on, watch out. The problem here is this is a lot of juice and Vancouver’s desperate with their backs against the wall. I look for this game to return to the form we’ve seen over the course of the series so I’ll back the over here as my free play for this game but my stronger play is on the side and I have that available as a premium pick that you can find here.