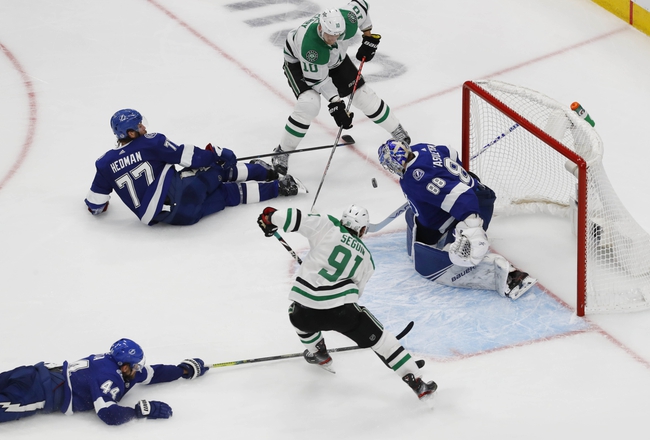 The Tampa Bay Lightning and the Dallas Stars meet in game six of the Stanley Cup Finals in NHL action from Rogers Place on Monday night.

The Tampa Bay Lightning will look to rebound after letting Dallas climb back into the series, with the Stars making it a 3-2 set after a 3-2 win for Dallas in double overtime last time out.

Corey Perry opened the scoring for the Stars with just over two minutes to go in the opening period and Ondrej Palat would equalize for the Lightning just under five minutes into the second period. Mikhail Sergachev made it 2-1 Tampa Bay just under four minutes into the 3rd and the lead held up until Joe Pavelski tied the game at two apiece following a goal with just under seven minutes to go in the 3rd. The game would need OT, but the first overtime period so no deciding goal, so it was off to double OT where Perry banged home his second of the game just before the midway portion of double overtime to give the Stars the win and force a game six in the process.

Anton Khudobin got the win after stopping 39 of 41 shots on goal for the Stars in the victory in net, while Andrei Vasilevskiy took the loss in net for the Lightning after allowing all three goals on 33 shots faced in defeat.

I think that this is the last time I’ll be backing Tampa Bay in this series, as If this one goes seven, the Stars will have 100% of the momentum and I’m not sure Tampa Bay will be prepared for what’s coming in the event that Dallas forces game seven I’ll just take my shot with the SLightning again and look away in this one

The pick in this article is the opinion of the writer, not a Sports Chat Place site consensus.
Previous Pick
Tampa Bay Lightning vs. Dallas Stars 9/26/20 NHL Pick, Odds, and Prediction
Next Pick
Philadelphia Flyers vs Pittsburgh Penguins NHL Picks, Odds, Predictions 1/13/21