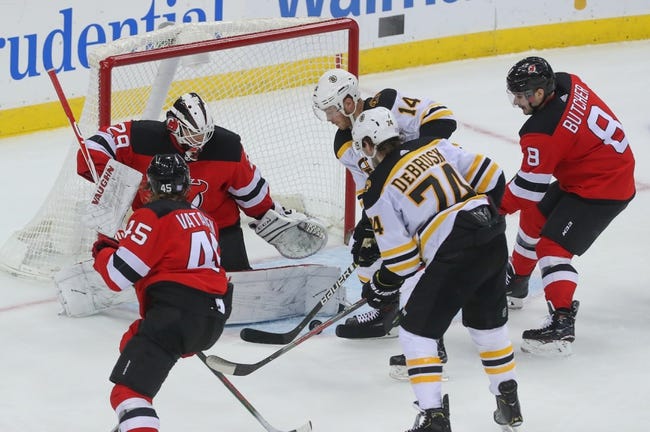 The Boston Bruins and New Jersey Devils meet Thursday in NHL action at the Prudential Center.

The Boston Bruins have made at least the second round of the playoffs in each of the last three years. The Bruins lose Torey Krug, Zdeno Chara and Joakim Nordstrom to free agency, while they added Craig Smith. With a healthy David Pastrnak and Brad Marchand, the Bruins have possibly the best group of forwards in the league. With the core of last years squad still intact, the Bruins are still part of the short list of elite Stanley Cup contenders.

The New Jersey Devils are coming off a 28-win season and have made the postseason just once since the 2012-13 season. The Devils bought out Cory Schneider, while they lost Sami Vatanen, Mirco Mueller and John Hayden to free agency. The Devils added Corey Crawford, Andreas Johnsson, Ryan Murray and Dmitry Kulikov. The Devils have some nice pieces to be competitive this season, but they’re still probably a player or two away from confidently entering the playoff conversation.

The Boston Bruins are obviously the better team here, but this is also the first game of the season and I'm not eager to lay big juice when teams are getting their feet under them. We usually see some rust at this point in the season and it's a good time to find upsets. The New Jersey Devils have also played their best hockey at home and they have some underrated talent that can surprise folks. Either way, I'll take a stab with the plus money.