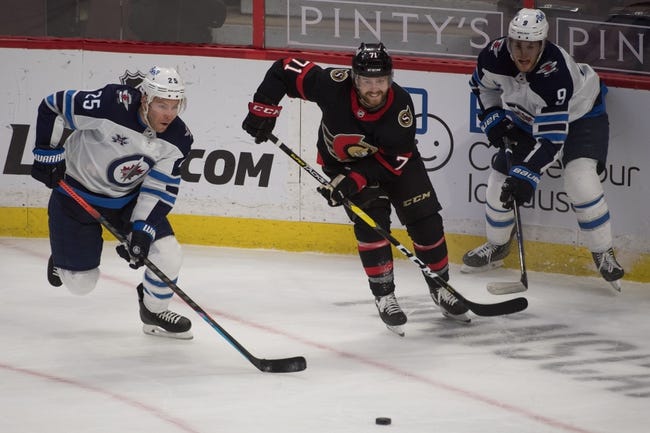 The Ottawa Senators and the Winnipeg Jets meet in NHL action from Bell MTS Place on Saturday night.

The Ottawa Senators will look to bounce back from a 4-1 loss to Winnipeg in their last matchup. Nikita Zaitsev leads the Sens in scoring with 5 points, all coming on assists while Connor Brown, Chris Tierney, Brady Tkachuk, Josh Norris and Drake Batherson each logging 3 points with Tierney putting up 3 goals while Tkachuk and Norris each have a goal and 2 assists and Brown and Batherson each have 3 assists.Matt Murray’s seen the bulk of the workload for Ottawa in goal with a 1-3 record including 14 goals allowed on 117 shots against this season.

The Winnipeg Jets will look to build on their win over Ottawa last time out. The Jets shook things up on Saturday, trading Patrik Laine for Pierre-Luc Dubois, a move that’s only going to add to Winnipeg’s scoring punch this season while adding some physicality as well. Kyle Connor leads the Jets in scoring with 7 points coming on 3 goals and 4 assists, both team-highs while Mark Scheifele has 5 points with 2 goals and 3 assists. Blake Wheeler and Nikolaj Ehlers has 2 goals and 2 assists each while Neal Pionk has 3 assists. Connor Hellebuyck has a 2-1 record with 6 goals against on 92 shots against for a 2.00 GAA this season.

The move for Dubois will help Winnipeg down the road, but for right now it kind of throws a wrench into the Jets’ chemistry. The thing is though that Ottawa’s been a profitable road fade for some time now and  I don’t see that changing against a Winnipeg team that’s only improving as time goes on. I’ll side with Winnipeg in regulation to get the price on the Jets down here.