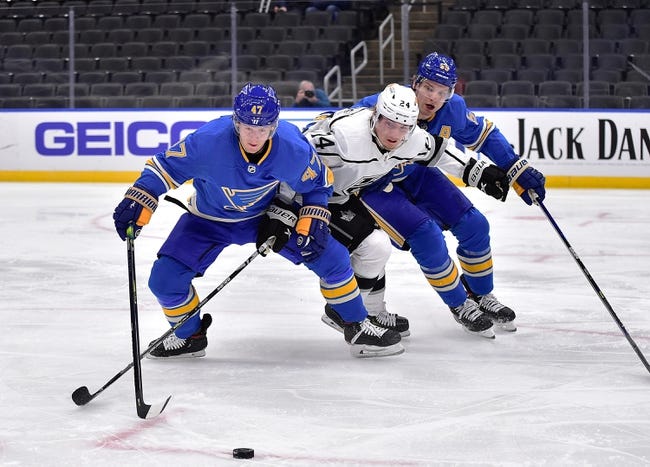 The Los Angeles Kings and the St. Louis Blues meet in NHL action from the Enterprise Center on Sunday night.

The Los Angeles Kings will look to bounce back from a 4-2 loss to the Blues on Saturday. Anze Kopitar leads the Kings in scoring with 7 points all coming on assists while Jeff Carter has 5 points with a goal and 4 helpers. Andreas Athanasiou has 3 goals and an assists for his 4 poitns while Alex Iafallo, Adrian Kempe, Drew Doughty, and Dustin Brown all having 3 points with Kempe posting 3 goals, Brown logging 2 goals with an assist, Iafallo logging 3 assists and Doughty putting up a goal and 2 helpers. Jonathan Quick’s made 3 starts with a 1-2 record, a 3.18 GAA with 10 goals allowed on 97 shots against while Cal Petersen has a 3.09 GAA with an 0-2 record and 6 goals allowed on 53 shots against.

The St. Louis Blues will look to build on their win over the Kings from Saturday. Jordan Kyrou and Rob Thomas each have a team-high 4 points with Kyrou logging 2 goals and 2 assists while Thomas has a team-high 4 assists. Ryan O’Reilly, Jaden Schwartz, David Perron and Brayden Schenn each have 3 points with O’Reilly logging 3 assists while Perron and Schwartz each have a goal and 2 helpers and Schenn has 2 goals and an assist. Jordan Binnington leads the Blues in goal, posting a 3-1 record with a 2.53 GAA with 12 goals allowed on 138 shots against this season.

I get why St. Louis would be favored as they’re the better team and I don’t have high hopes for the Kings this season. However, the Kings have played well in the short term, not losing by more than a goal in four of their five games so far this year and with St. Louis not having really rounded into form yet, I think Los Angeles can battle here as well so I’ll take the Kings on the plus puck line to get a bit of a headstart with Los Angeles here.