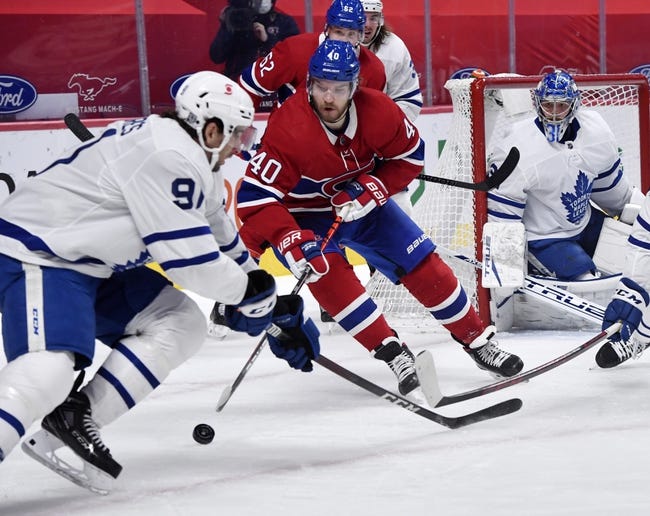 The Montreal Canadiens and the Toronto Maple Leafs meet in NHL action from the Scotiabank Arena on Saturday night.

The Montreal Canadiens will look to rebound from a 3-0 loss to Edmonton in their last matchup. Jeff Petry leads the Habs with 14 points coming on 6 goals and 8 assists while Tyler Toffoli has 13 points with 9 goals and 4 assists. Nick Suzuki has 12 points with 3 goals and 9 helpers. Jonathan Drouin and Josh Anderson each have 11 points with Drouin logging 10 assists while Anderson has 9 goals and a pair of assists. Tomas Tatar also has 8 points with 4 goals and 4 assists for Montreal this season. Carey Price has also split time in goal with Jake Allen, with both picking up 4 wins and with Allen owning the better GAA at 2.01 compared to Price’s 2.84 in 8 appearances this season.

The Toronto Maple Leafs will look to build off of their 4-2 win over Montreal in their last outing. Mitch Marner leads the Leafs with 21 points coming on 6 goals and 15 assists while Auston Matthews has a team-high 11 goals along with 5 assists for his 16 points. John Tavares has 5 goals and 9 helpers for his 14 points while William Nylander hs 12 points with 4 goals and 8 assists and Morgan Rielly’s got 11 points with 9 assists this season. Frederik Andersen’s made 12 starts for Toronto this year, going 9-3 with a 2.59 GAA this season.

I get why the plus money with Montreal is tempting as the Habs are still one of the better teams in the league early on this season. However, Toronto’s just on another level right now and we’re finally starting to see what life is like when Toronto lives up to the lofty expectations at the beginning of every season. This is also a rivalry game of rivalry games so it means just that little bit more and Toronto usually thrives on beating up Montreal, so I’ll lay the juice with Toronto here.