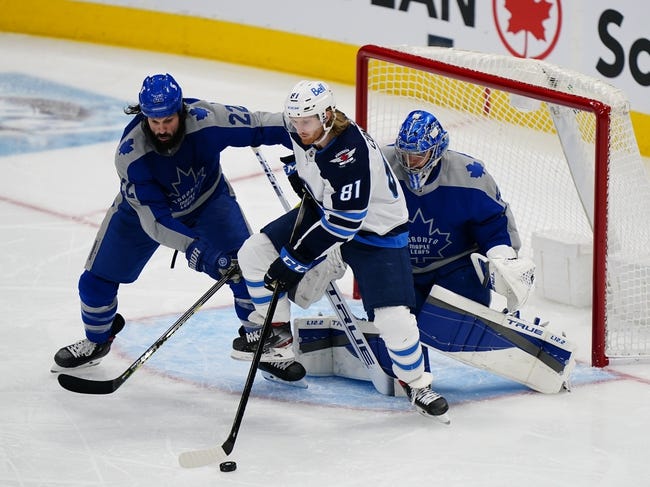 The Winnipeg Jets and the Toronto Maple Leafs meet in NHL action from Scotiabank Arena on Thursday night.

The Winnipeg Jets come into this game looking to build on their 4-3 win over Toronto last time out. Mark Scheifele leads the Jets in scoring with 34 points including a team-high 23 assists and 11 goals while Nikolaj Ehlers has 25 poits with 11 goals and 14 assists. Blake Wheeler and Kyle Connor each have 24 points with Connor splitting between 12 goals and 12 assists while Wheeler has 17 assists. Neal Pionk has 21 points with 18 assists while Andrew Copp has 17 points with 5 goals and 12 apples. Paul Stastny has 14 points with 7 goals and 7 apples while Adam Lowry and Mason Appleton each have 13 points. Connor Hellebuyck has made 20 appearances for the Jets, picking up 12 wins with a 2.75 GAA this season.

The Toronto Maple Leafs will look to bounce back after their 3rd straight loss last time out. Mitch Marner has a team-high 35 points with 10 goals and a team-high 25 assists while Auston Matthews leads the Leafs in scoring with 20 goals as part of his 33-point tally this season. John Tavares has 23 points including 8 goals and 15 assists while William Nylander’s got 21 points split between 10 goals and 11 assists. Morgan Rielly has 20 points with 17 assists while Zach Hyman and Jason Spezza each have 16 points with Hyman splitting between 8 goals and 8 assists while Spezza has 11 assists. Frederik Andersen’s made the majority of the appearances in goal for Toronto, going 12-7 with a 2.76 GAA in 19 appearances for Toronto this season.

I think you could make a case for either side here, as Winnipeg obviously showed that they’re able to take down Toronto last time out and also the Jets have been one of the league’s best on the puck line this season. On the other side, Toronto won’t stay down for long and you have to think when they come back, it’ll be in a massive way. Instead, I’m going to side with the over as We saw enough scoring in the last matchup to get us over that total and I could easily see more of the same here. I just think that another high-scoring affair is on the cards here, so give me the over.