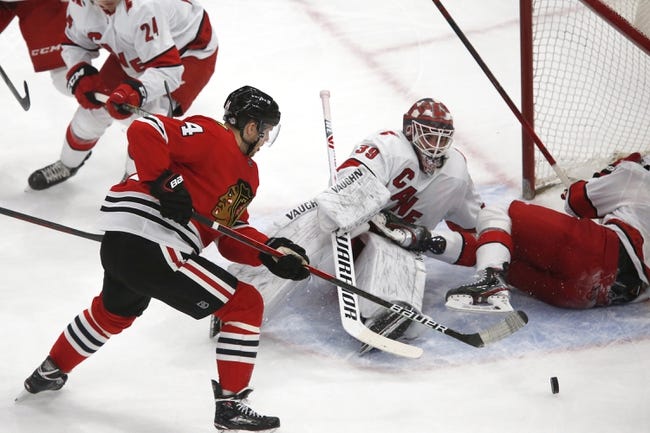 The Carolina Hurricanes and the Chicago Blackhawks meet in NHL action from the United Center on Thursday night.

The Carolina Hurricanes will look to rebound from a 2-1 loss to the Blackhawks last time out. Sebastian Aho leads the Hurricanes in scoring with 33 points including a team-high 15 goals along with 18 assists while Martin Necas has 9 goals and 19 assists for his 28 points and Dougie Hamilton has 27 points with a team-high 24 assists and 107 shots on goal. Andrei Svechnikov, Vincent Trocheck and Jordan Staal all have double-digit goal and assist tallies while Nino Niederreiter has 14 goals this season. As a team, Carolina is averaging 3.3 goals on 31.8 shots with a 30.2% success rate on the PP while allowing 2.5 goals on 28.8 shots with an 83% success rate on the PK this season.

I’ve gone back and forth on this game as Carolina’s the better team side-by-side, but the Blackhawks have picked up a couple of wins in the matchup and both were at home. Instead, I’m going to side with the over. Most of these meetings this season have seen at least seven goals and I think another high-scoring game is on the cards here. Give me the over in this spot.