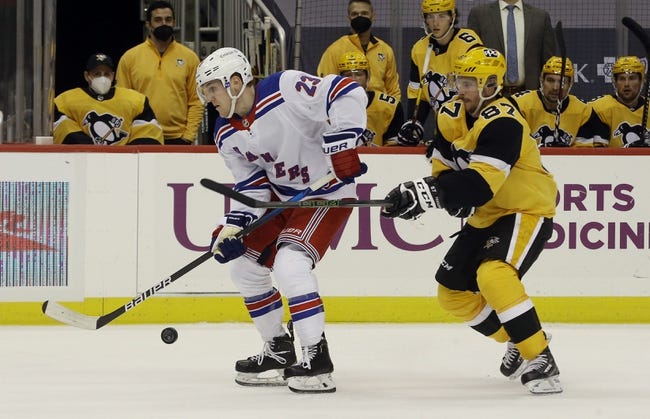 The Pittsburgh Penguins and the New York Rangers meet in NHL action from Madison Square Garden on Tuesday night.

The New York Rangers will be out to rebound from a 3-2 loss to Buffalo last time out. Artemi Panarin leads the Rangers in scoring with 36 points including 11 goals and 25 assists while Adam Fox has a team-high 29 assists and Chris Kreider has a team-high 17 goals this season. Pavel Buchnevich also has 14 goals and Ryan Strome has 24 points with 11 goals and 23 assists. As a team, New York is averaging 3.2 goals on 29.5 shots with a 17.6% success rate on the PP while allowing 2.6 goals on 28.5 shots with an 84.8% success rate on the PK this season.

I get that the Rangers have stepped up their play lately and usually play better at home. However, We’re getting plus money with a Pittsburgh team that’s been one of the hotter teams in the league over the last month plus and while I respect what the Rangers have done, I have a hard time backing a Rangers team that just lost to the lowly Sabres against the Penguins. I think all of the value is with the Penguins here, so give me the Penguins and the plus money here.